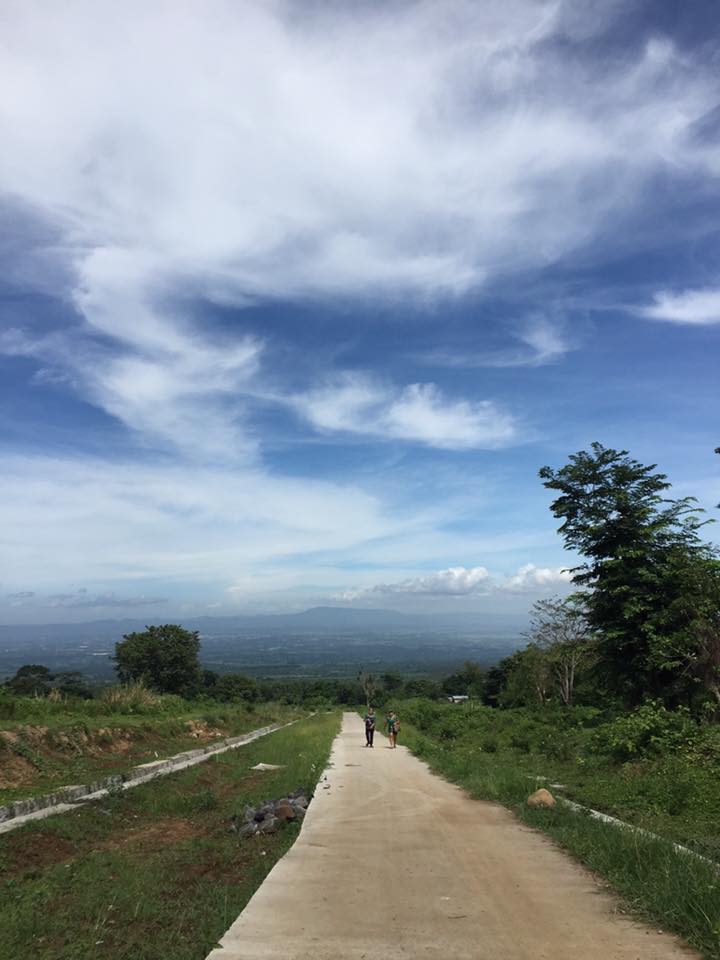 The low-lands of Naga. On our way to jump-off point to Mt. Isarog.

Going to Naga by bus from Alabang took 9 hours. Naga City is located within the province of Camarines Sur in the southeastern tip of Luzon island, Philippines. We arrived in Naga terminal station at about 7 in the morning of June 18, 2016. We rode a tricycle to the center of the town, ate breakfast inside the market, packed our lunch, rode a jeep to Brgy. Panicuason, and got off by a hot-spring signage after more than a 30-minute ride. The lady by the entrance of the spring told us that the girl scout camp was 1.5 km away. So, we walked all the way to the girl scout camp. We passed by lines of vehicles along the highway. We also met mostly young people walking opposite our direction. It was the foundation day of Naga and they were celebrating it by planting trees. We met our guides outside the girl scout camp and, we walked another 1.5 km to our jump-off point. 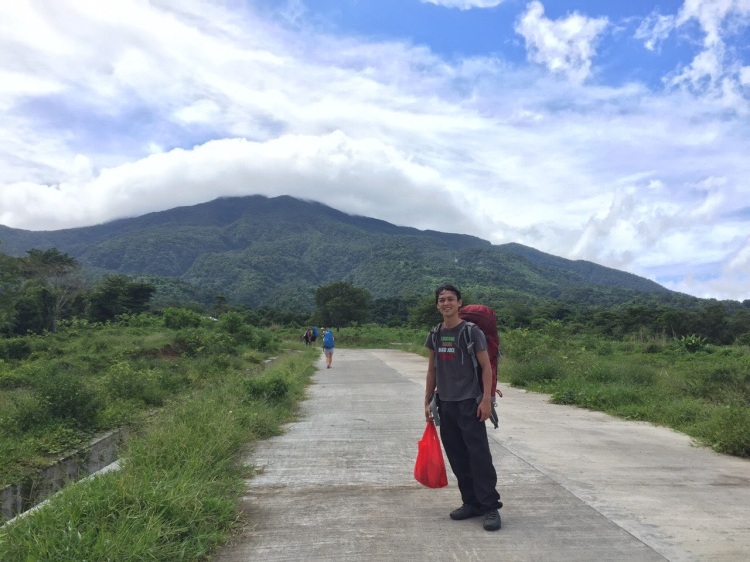 With Mt. Isarog as my background. I am carrying my packed lunch and jackfruit for merienda.

While on the concrete road called Malabsay to the jump-off point, during a break, in between heavy breaths, Oli asked why we climb mountains. In Mt. Talomo, I said mounting climbing is life condensed in a day or two or for the duration of the climb. Now, I had a better answer. I said, we go through a lifetime with every mountain we climb. 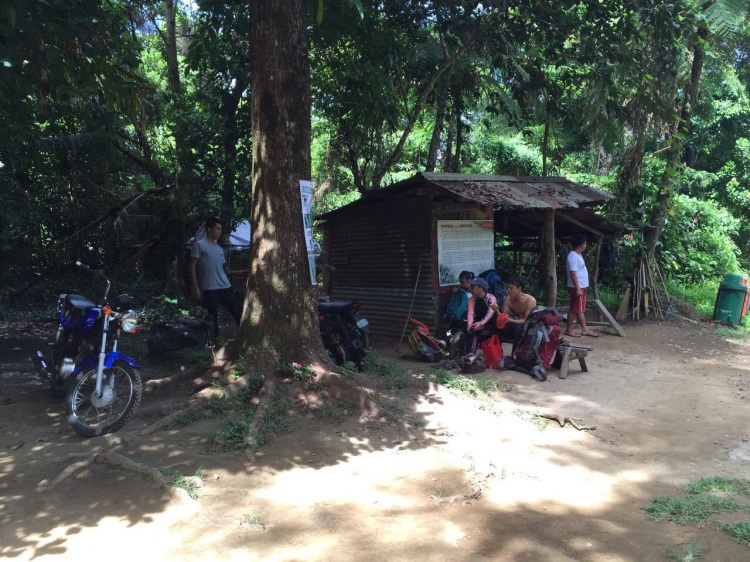 We took a rest after repacking and eating merienda at our jump-off point by the DENR staff hut.

With my two BMW big bikes!

We listed our names on the registration and got ready to climb Mt. Isarog. Three men, in three BMW motorcycles, arrived. They said they drove all the way from Manila, and have in fact travelled around the country with their expensive motor bikes. They asked us if we were climbing the mountain. We asked them if they were climbing with us. No, they said. They were just going to see Malabsay falls, a 5-minute trek down from where we were. When they left for the falls, I surreptitiously had a photograph with their motorcycle. 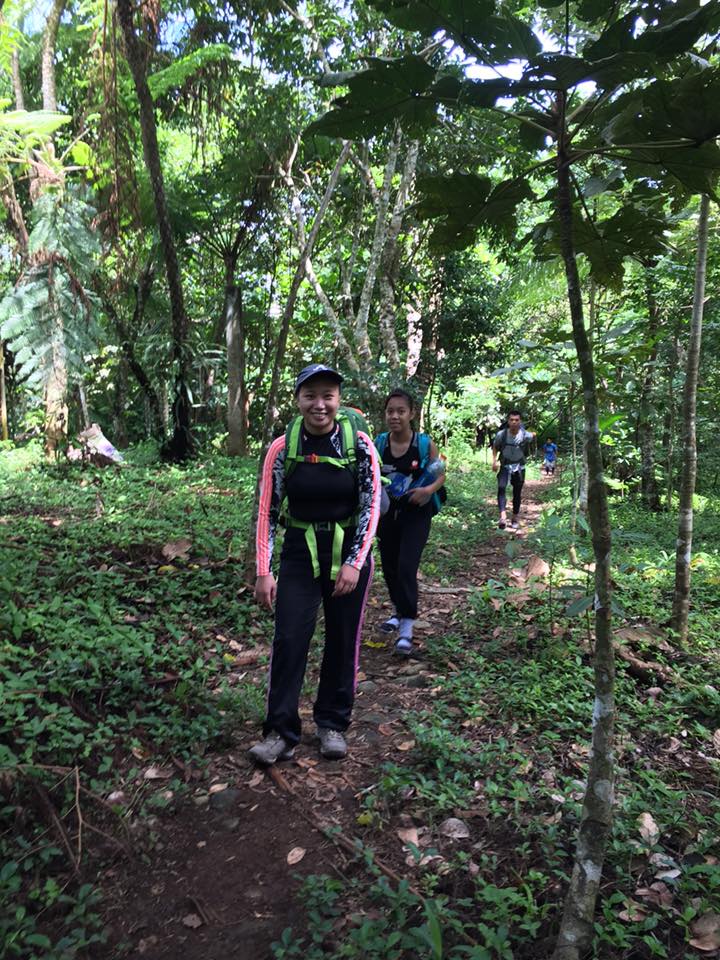 Kristel, Oli, followed by Angel on the trail to the summit of Mt. Isarog.

We started our ascent to Mt. Isarog in between ducking under bamboo grass and wading through thorny vines. And the usual terrain of a mountain unfolded: 45 to 90 degree ascent as we held on to either roots of the trees, or in extreme cases, the rope provided by the guide. But Mt. Isarog seems to be a breeding ground for limatik, that blood- sucking leech. They were everywhere, perhaps because it was raining: on the soil during our rest, or on the leaves of trees and shrubs. We also watched out for them stick on our clothes, on our packs, and sometimes on our skin. But thankfully, none of us was bitten by one. Insect repellant lotion must be very effective against them. 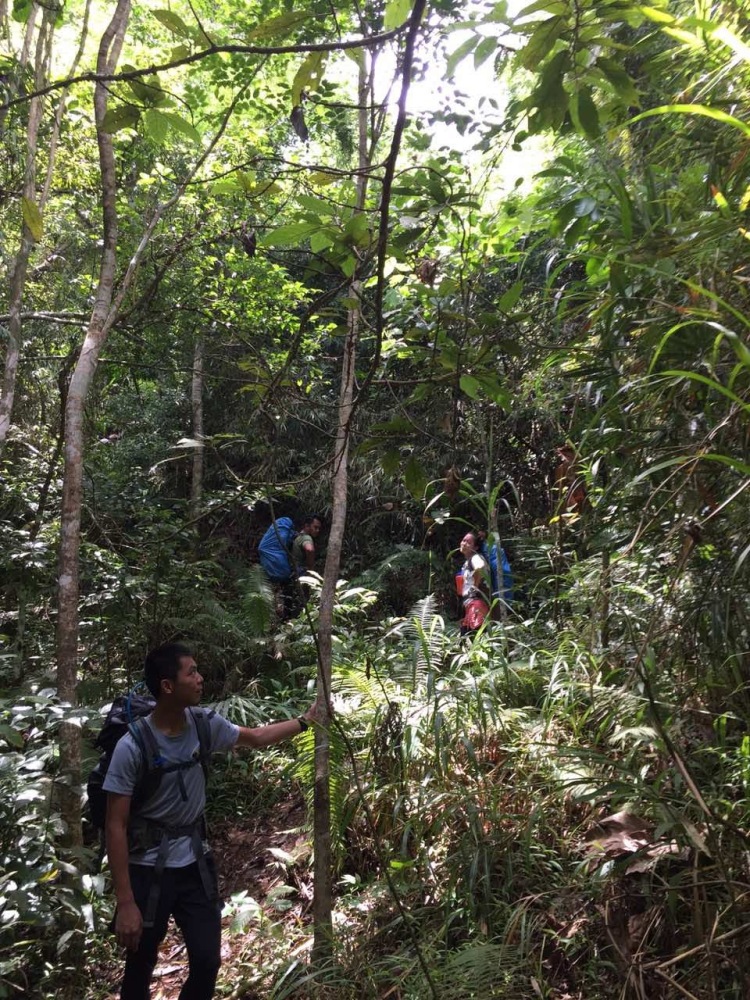 Angel, Miguel, and Kai on the trial to Mt. Isarog summit.

Six hours after we started our ascent, we reached camp four where we pitched our tent. Miguel and Angel prepared our dinner. Kristel, Kai, Darlene, and Oli helped, while I fetched water from a stream a few minutes away. This stream is dry during summer. I collected the little water under the rock. The water had a sweet aftertaste.

Miguel, Angel, and Kai are members of Aces, a non-profit organization of people who love mountain climbing in particular and the outdoors in general. This has been my fourth mountain with Aces, starting with my first mountain climb in Mt. Napulauan, followed by Mt. Marami, the mountains in Kibungan, and now, Mt. Isarog. It was my first time to climb with Oli. 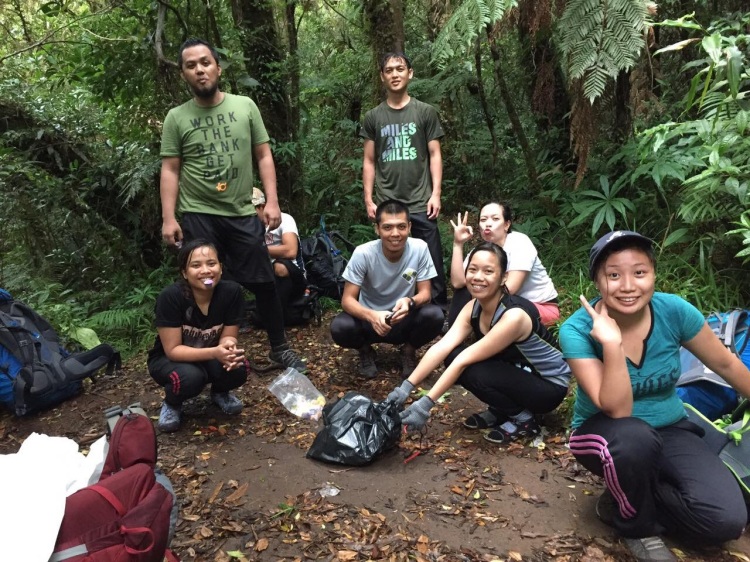 In one of the four camps to the summit taking a rest. Darlene, Miguel, Angel, ako, Oli, Kai, and Kristel.

The following morning, at about 3, we woke up, drank coffee and started our assault of the summit. Oli felt cold and tired. Her spirit was low. To our delight though, she climbed the summit with us. After an hour and a half of trek, we reached the summit which was a little clearing on the side of Mt. Isarog, a window in the thick forest where we had a peek of the nearby mountains. On a clear day, said our guide, we could see Mt. Mayon on the south. But it was raining and the cloud was very thick so we could not see anything below. In less than a minute, the fog cleared and we saw the mountain side, the mountain on the left, the mountain below, but we couldn’t see anymore. When the sun shone at about 7 am, we watched the clouds move, curling and twisting as if to show an explosion in slow motion. After that, we gave up, took some group photos, and went back down to our camp. We cooked and ate our breakfast, decamped, and went back down at about 9:30 am. 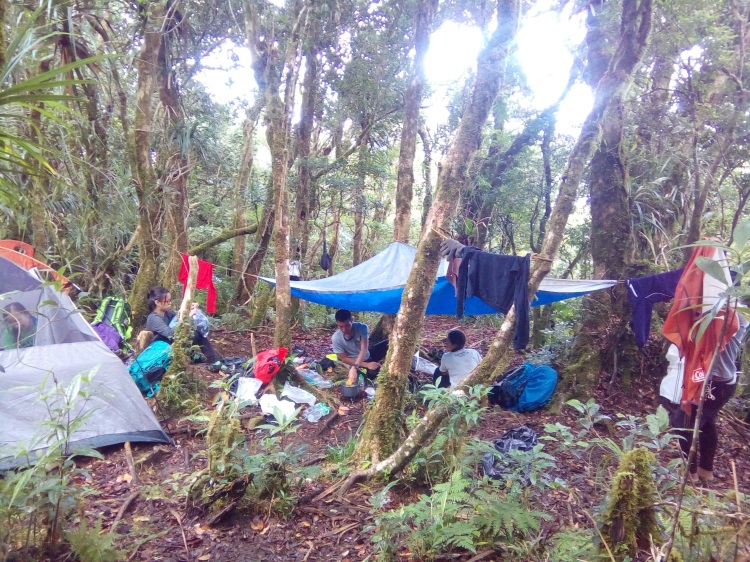 After pitching our tent, we hang our wet clothes, and prepared for the assault of the summit the following morning. Angel preparing our dinner as Kai looks on. 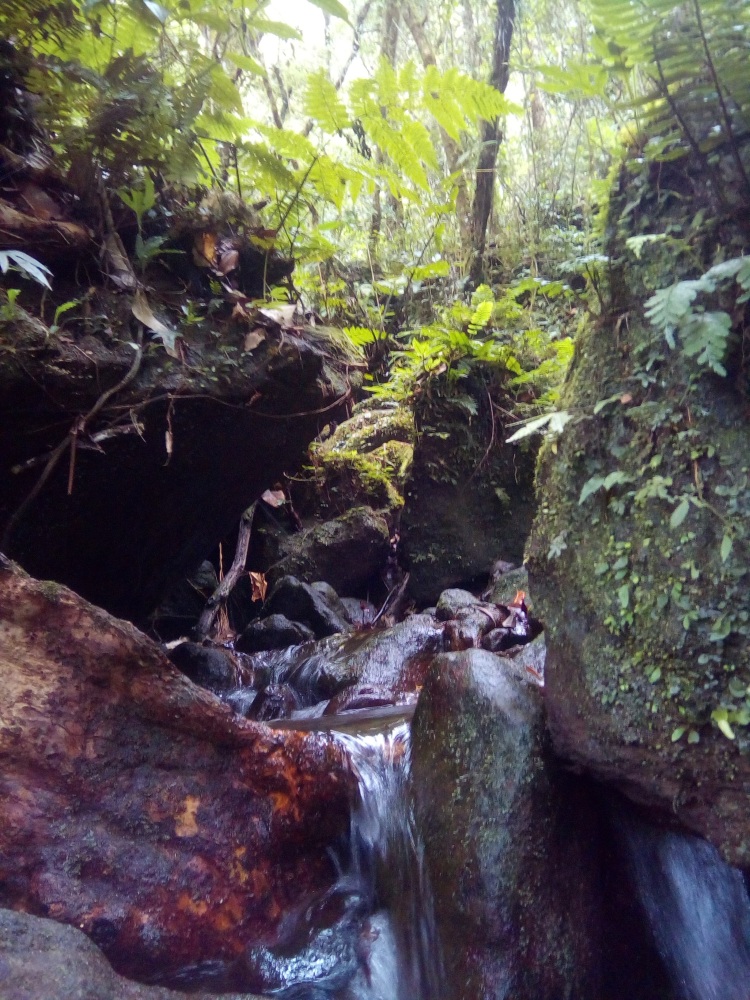 Our water source on the campsite. 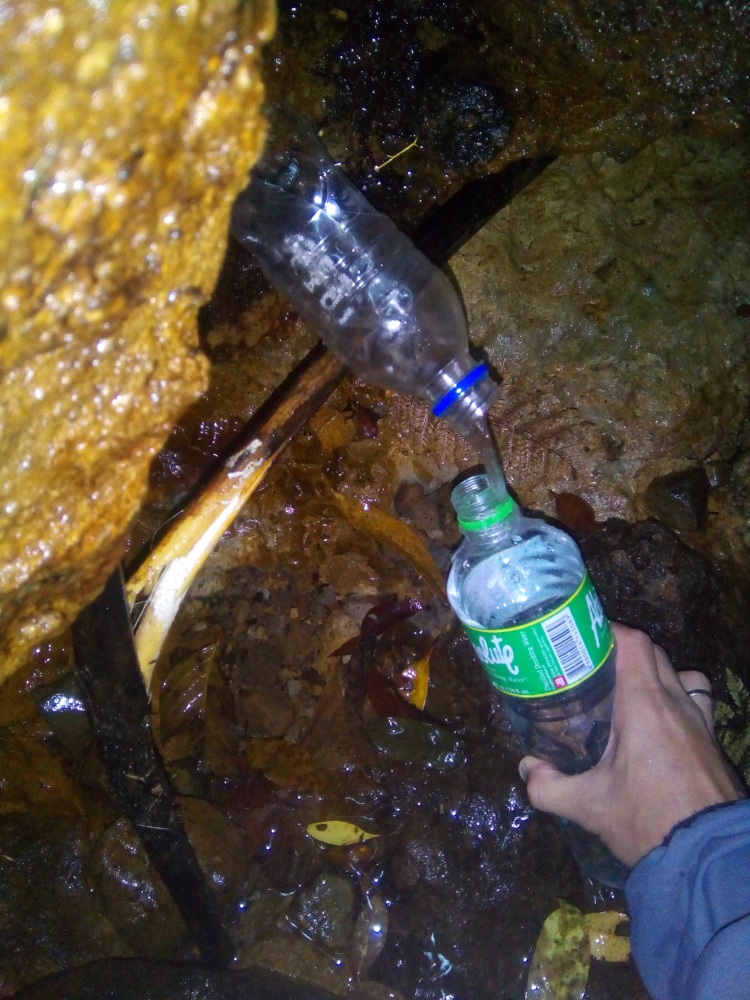 I fetched water for the group.

Our plan was to go down to the jump-off point then proceed to the Malabsay falls to chill our tired muscles. Some of us arrived at about 12. But Oli was left with the guide. She arrived three hours later saying that her legs were in pain and her knees were already making a sound. By the time she arrived, some of us had gone to the water falls and back. Some didn’t go to wait for Oli. They served her lunch the moment she arrived. We joked that if she continued walking her knees would separate from her legs. But we liked Oli because she never complained and instead maintained a positive, happy attitude. She reminds me about what I said in Mt. Daraitan:

“When you’re too tired from climbing a mountain peak, you look for something beautiful to justify your suffering. And you will find nothing but the changing color of the sky on sunrise and sunset. Or if you’re lucky, you’ll find it in the face of a loved one who decided to scale the mountaintop with you and share the joy of looking at the sky, or the view, or each other’s smile that hides the pain deep within the muscles.”

Oli’s smile hid the pain deep within her muscles. 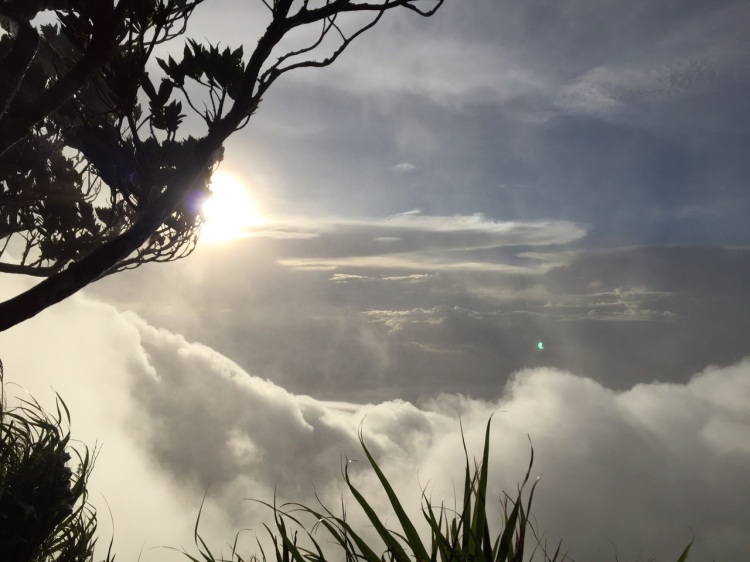 The sunrise partly dissolved the clouds on Mt. Isarog’s summit. 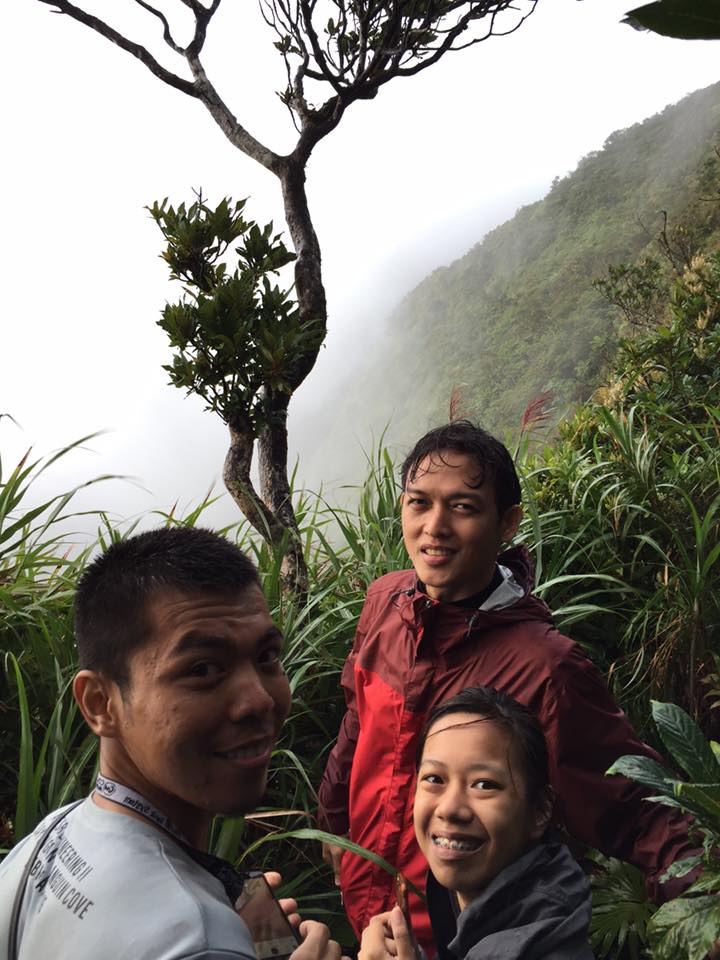 Angel, Oli, and I on the summit of Mt. Isarog.

The only portion of Mt. Isarog that often cleared of fog.

At past 4 PM, we rode a habal-habal from the jump off point to the jeepney terminal and back to Naga City. 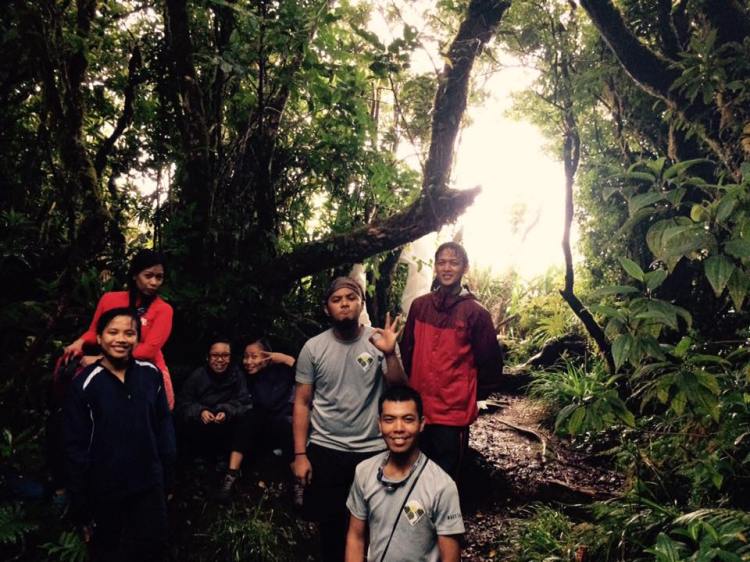 The group on the summit of Mt. Isarog. Darlene, Kai, Ole, Kristel, Miguel, Angel, and I.

Body builders in Malabsay falls. Miguel and I.

Mt Isarog was like my first mountain climb a year ago in Mt. Napulauan where my knees, my toes, and my leg muscles hurt after more than 17 hours total of walking. Mt. Isarog also hurt my leg muscles. Three days after the climb, the pain was still there. Perhaps because I adopted the pace of our guide. The truth is, an hour to our jump-off point on our way down, I was ready to at least rest. But the group kept on moving I didn’t want to be left behind.

A few weeks after Mt. Isarog, I went home to my home town in Pilar, Capiz. The evenings there are quiet and peaceful I was reminded of the times I was on a mountain, in my tent, tired from walking all day. On the mountain I didn’t feel lonely perhaps because all I wanted was to rest to have the strength to go down the following day. When I am at home and I hear the chirping of the cicadas or the occasional howling of dogs, I become sad. I think of the mountains. 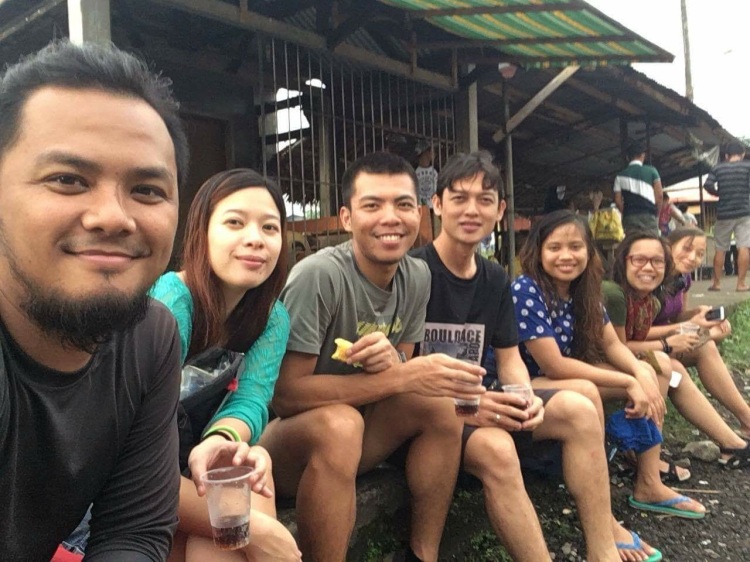 We celebrated our climb with soft drinks and bread from a nearby bakery, and a group photo on the gutter while waiting for our ride back to Naga City. Miguel, Kai, Angel, JP, Darlene, Oli, and Kristel. 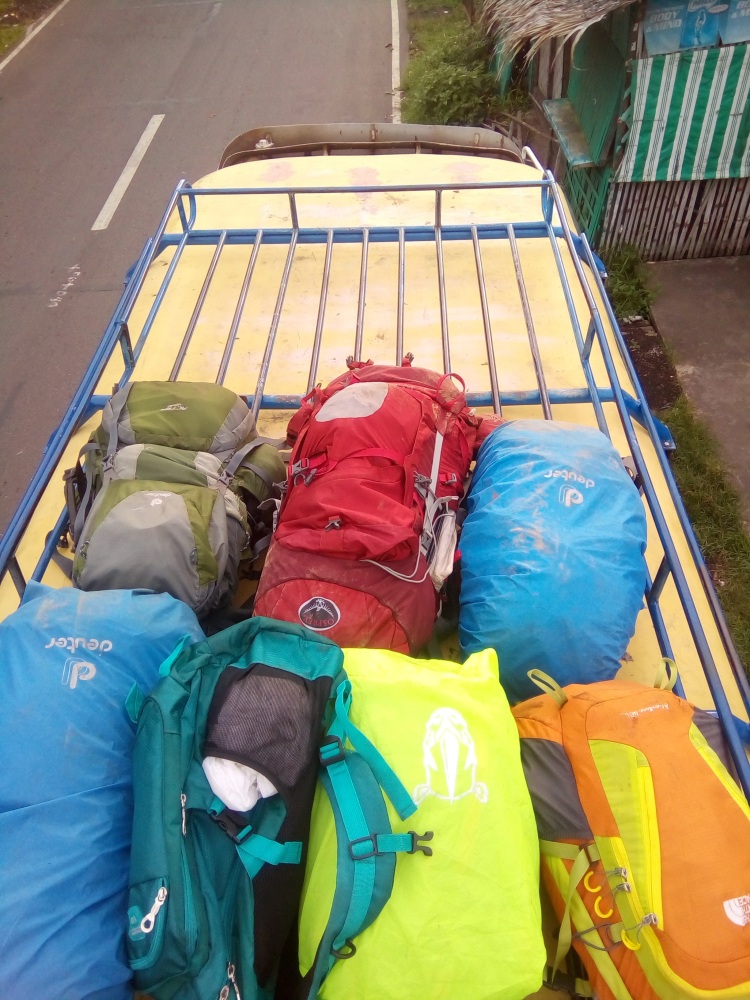 Our packs top-loading back to Naga.

One thought on “One mountain a lifetime: Our Mt. Isarog Climb”