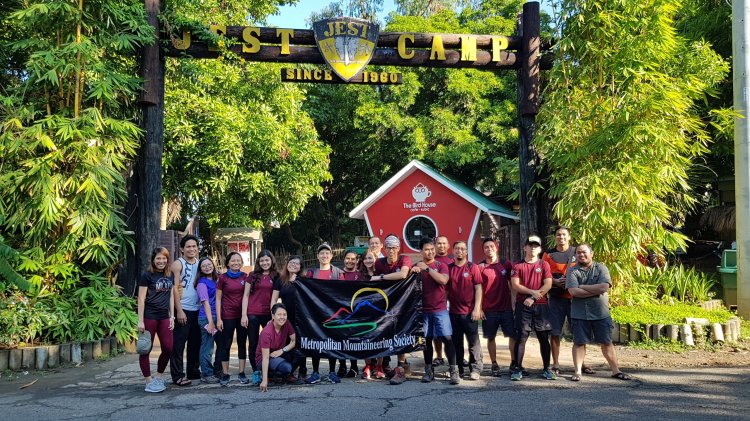 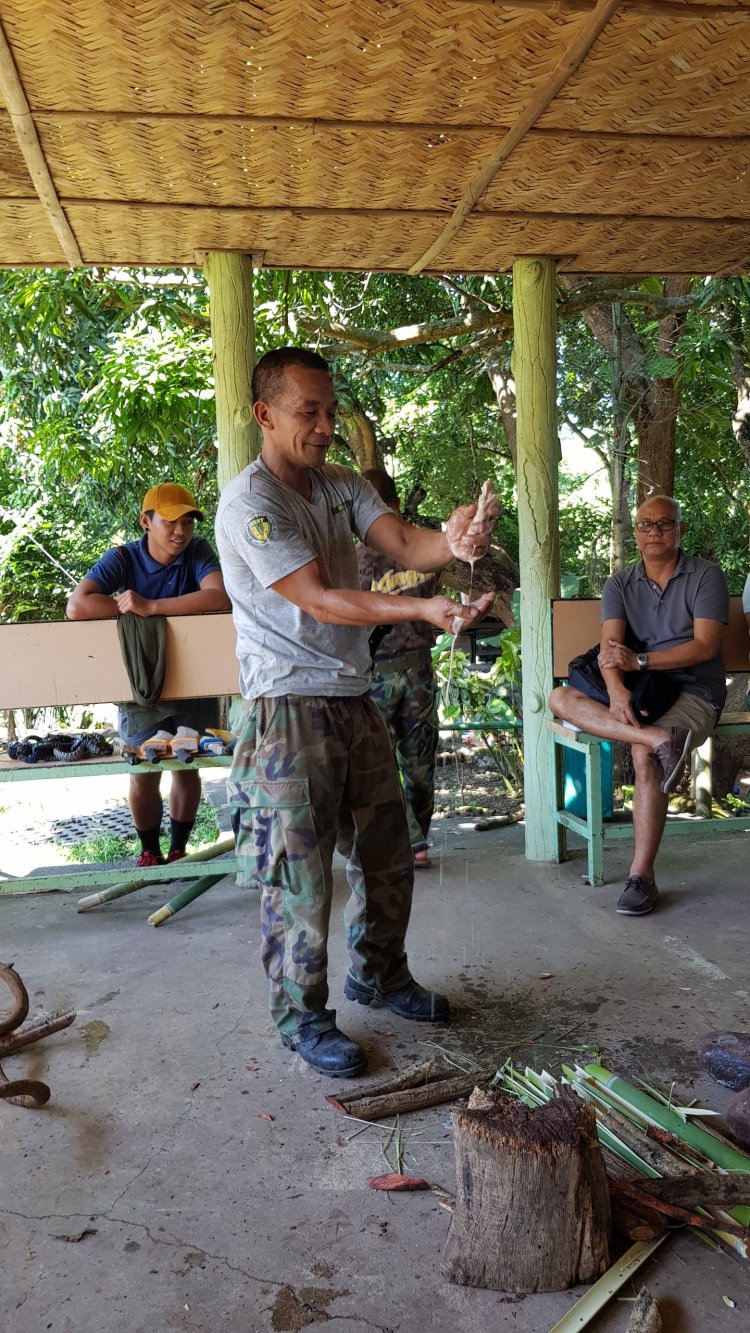 Max smashed the gugo vine with stone and squeezed its sap that may be used as soap, shampoo, and mosquito repellant.

Paula suggested that the group should meet-up at the fast food across the street from MRT Quezon Avenue Station. The meet-up was not later than 3am. Every one was at the venue at 3 am except the person who suggested the meet up place, Paula, who couldn’t join us last minute because of her work. 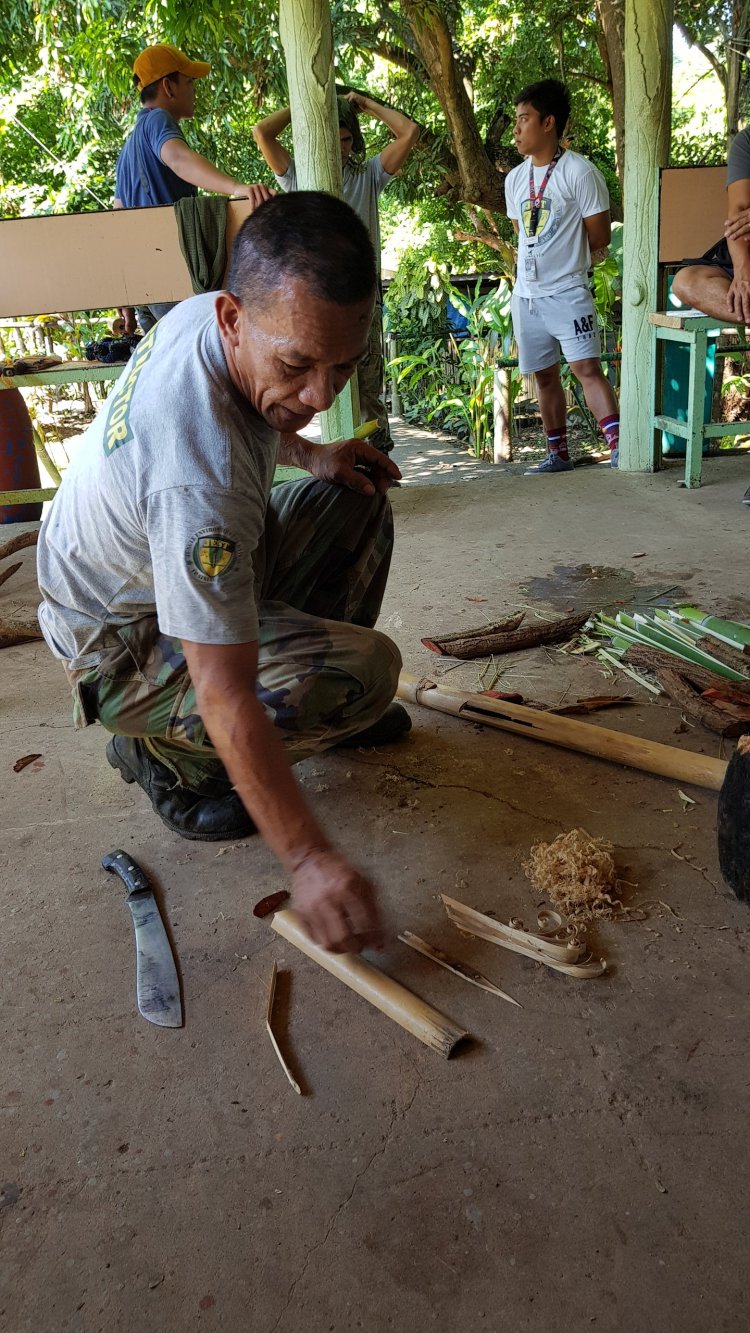 We left at 3:30 am and by around 6:30 am we were having breakfast in another fast food in Subic, Zambales. By 7:30 am, we were at Jest Camp in Subic ready for our training. It was May 26, 2018. We were informed that the orientation starts at 8:30 am. To pass the time, some went to sleep, some listened to music, some had chitchats with friends. 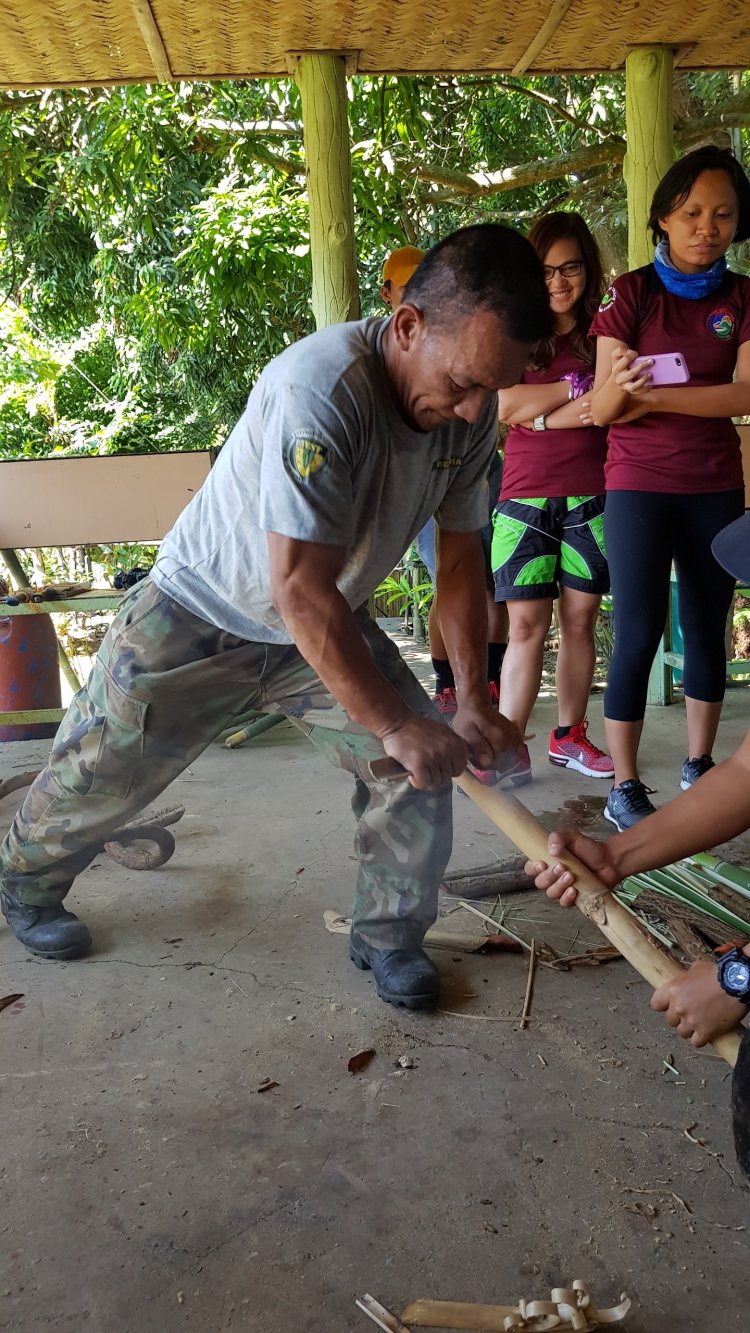 Max demonstrates fire making by the use of bamboo. When there is smoke, there is fire. But not necessarily when you are making fire through this traditional means. Smoke only means you have to rub faster.

At 8:30 a beautiful lady gave us a background of the Jest Camp: the camp started in the 1960s. It has partnered with different organizations like the PNP, BJMP, and the different branches of the military. 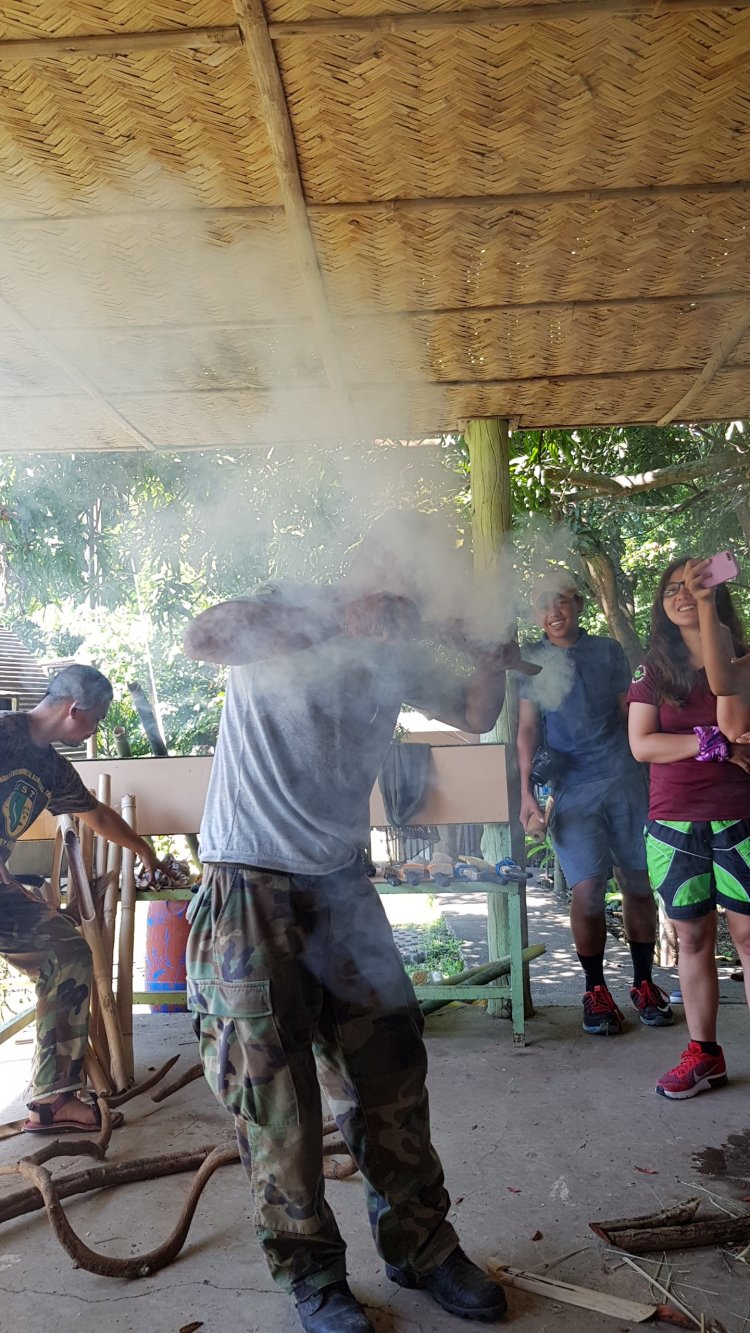 When there is so much smoke there is surely fire.

Then the camp nurse gave us another orientation which can be summarized as, if you are sick, you can’t join the training. Or if you join the training, the trainer can pull you out of training anytime. We were given a release waiver and quitclaim form to sign to free Jest Camp from all liability that might happen to us. 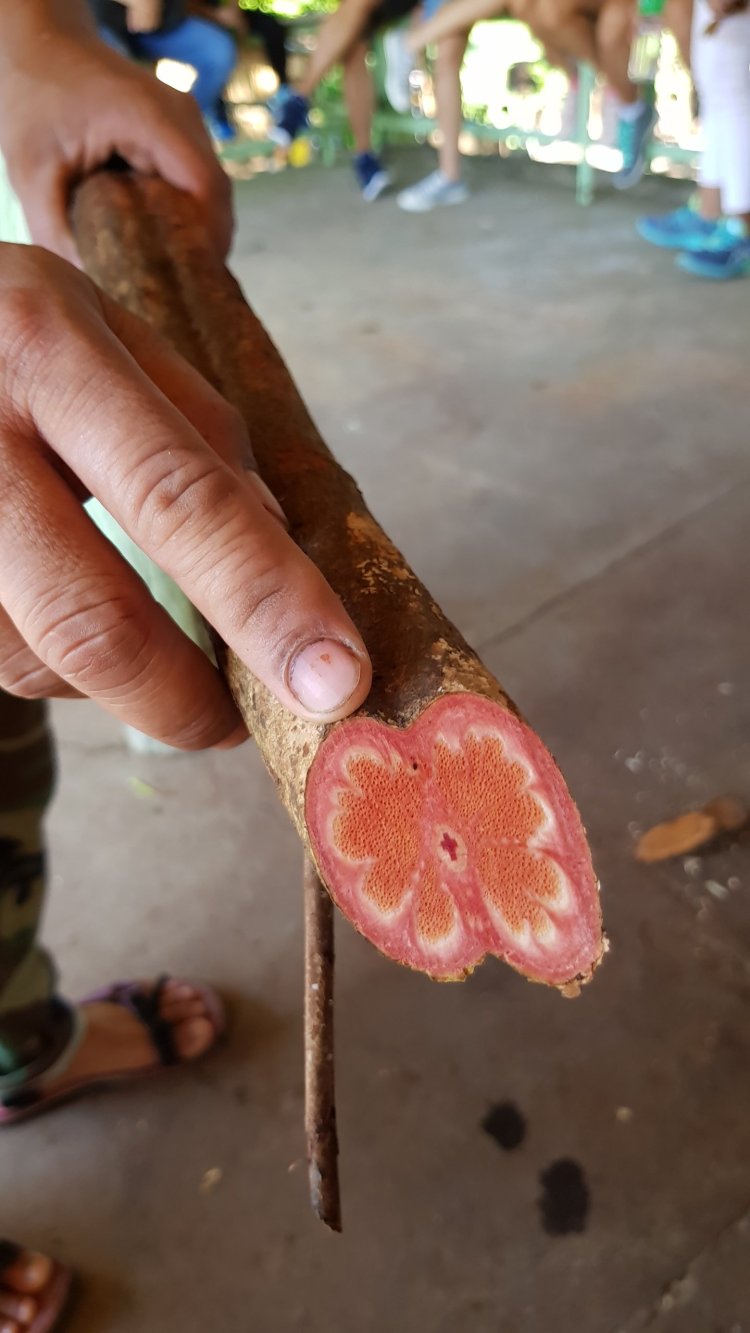 Max shows the cross at the center of the red vine. This taste sweeter than the white one.

After every one signed the paper, kuya Max aka Ronald “Max” Beldia demonstrated that we can make utensils out of the green bamboo. He also showed how to prepare the bamboo to cook rice and soup. He then demonstrated how to start a fire using the dried bamboo. He also showed us the vines that we can cut and get water from. A vine, the red one, tasted better than the white one. The red one tasted almost like coconut juice. 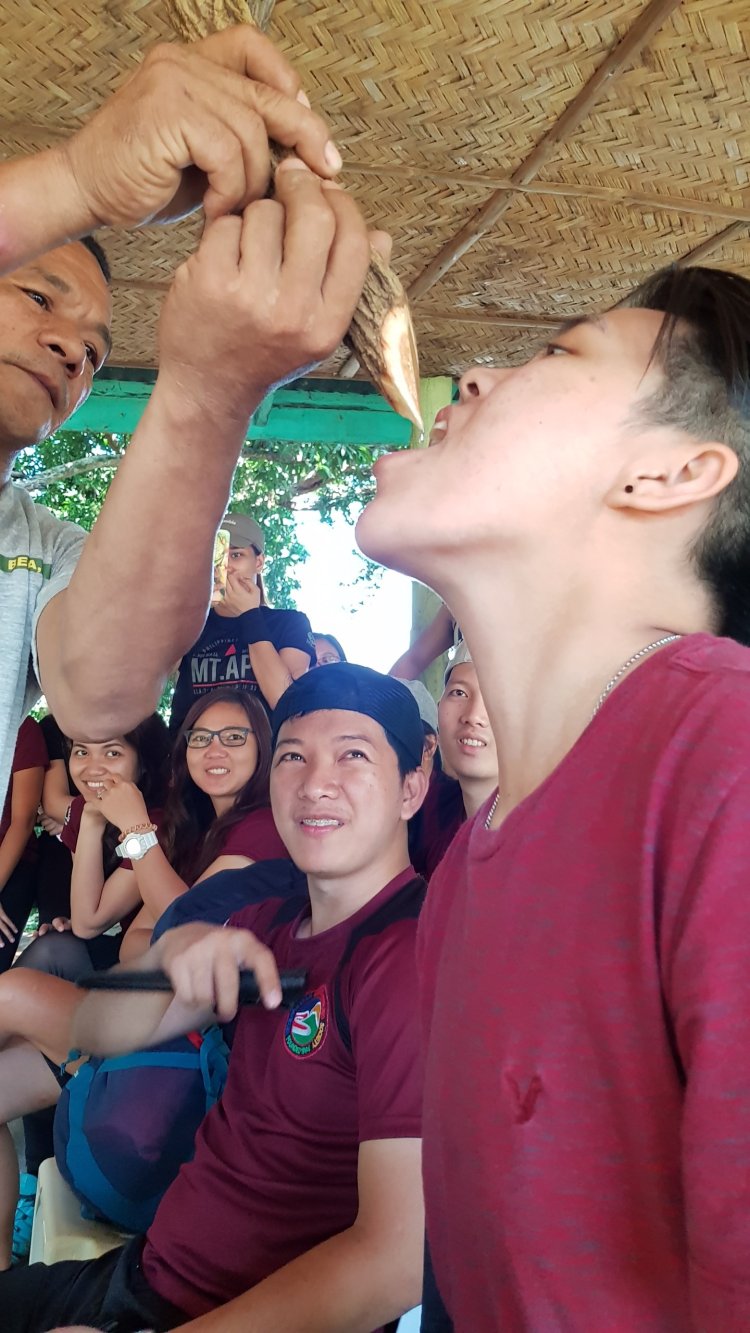 Max serves Lala drops of water from the white vine as her batchmates, Charmaine, Elcee, and Fhilpol look on.

After Max’s demonstrations, Ed aka Eduardo Tolentino showed us the different kinds of traps: from fish, to birds, to four-legged animals. While observing the demonstration, I farted loud enough to be heard by every body. Ed dismissed it by saying that it was good that I had it out otherwise I might get sick. Everyone laughed not at me anymore but on the half joke-half truth utterance of Ed. It saved me from too much embarrassment. I moved closer to see how the bird trap worked. My left arm touched the leaves of the eggplant that housed large ants. They bit me and caused blisters on my arm. 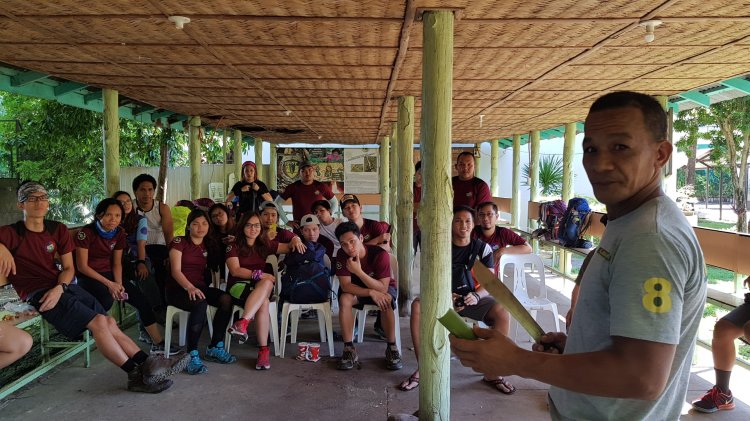 Max poses for a photo while conducting his demo

We were now ready for the hike to the campsite. There were two trails. One was 2 to 3 hours trek, the other was a 30 to 45-minute. Of course, we chose the latter. We waited for about thirty minutes for the camp’s truck that would transport us to the trail. The truck made two rounds since all of us 20 participants including our two trainers Max and Ed would not fit in the back of the truck. 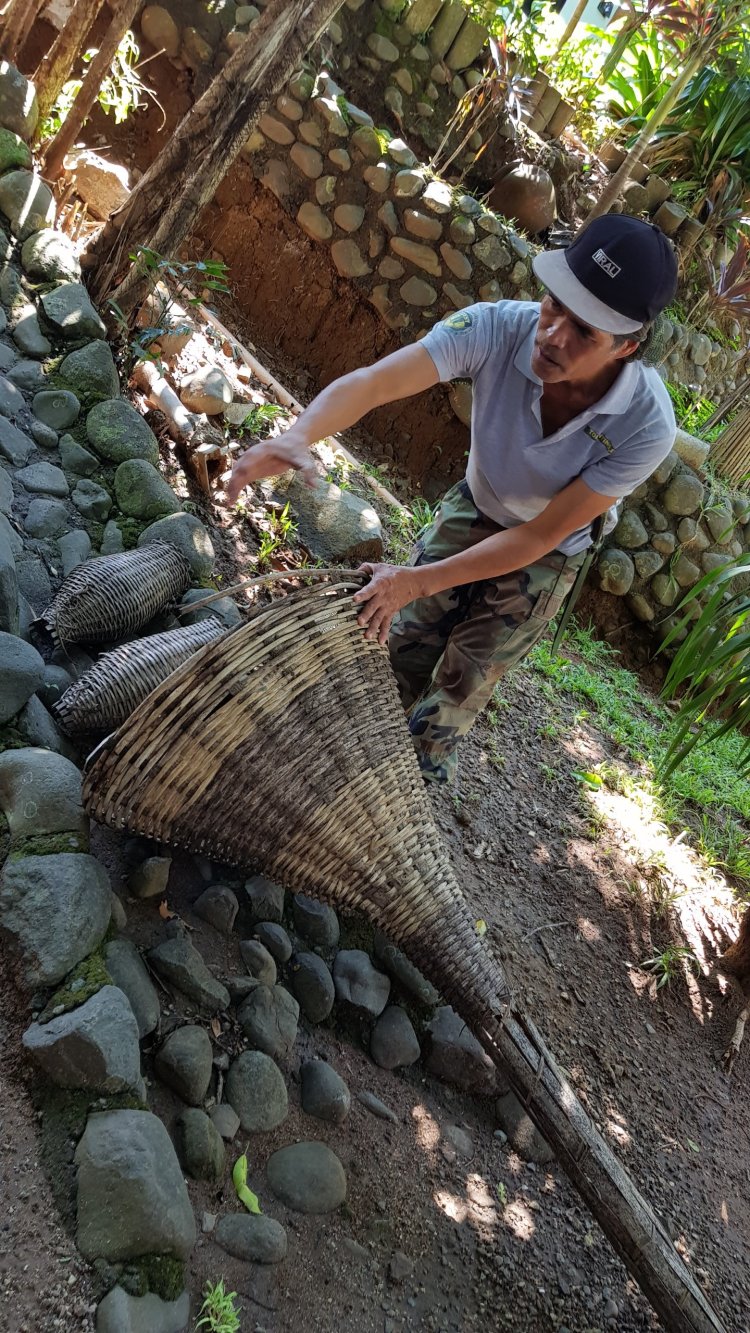 Ed show us the different sizes of fish traps 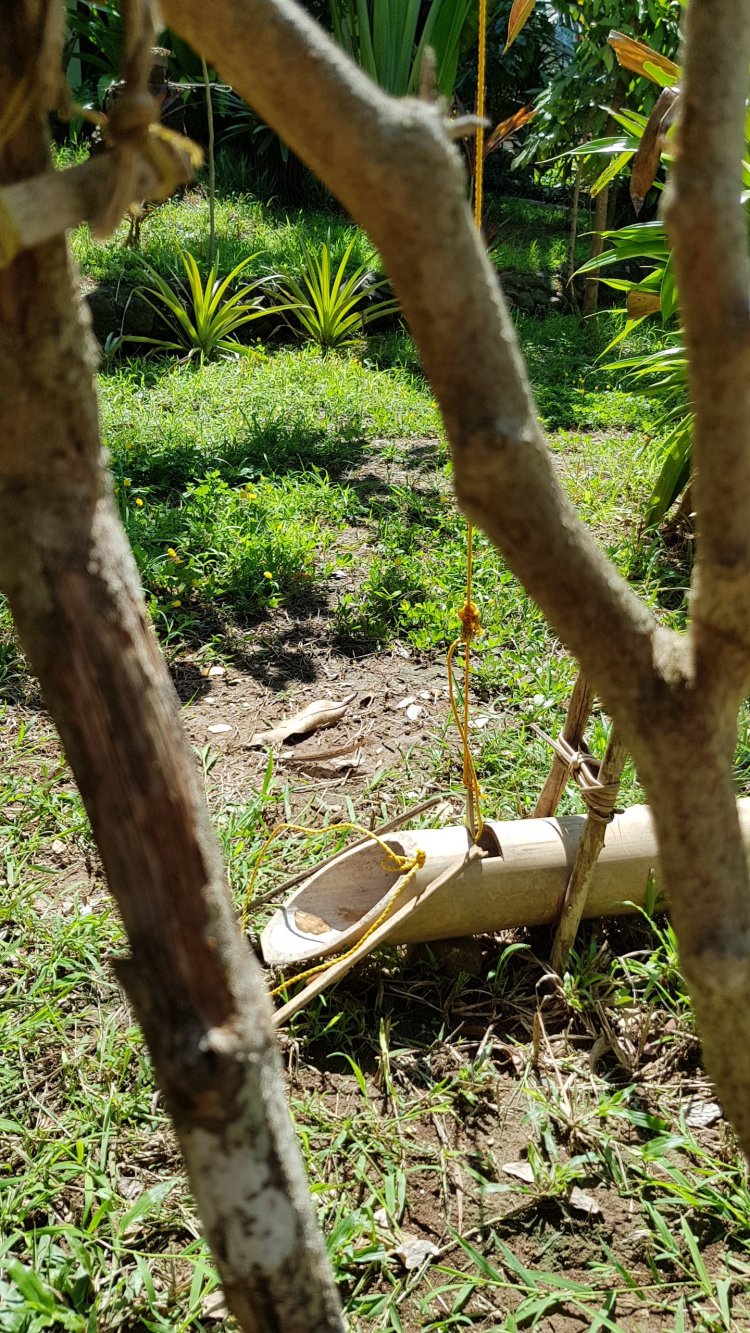 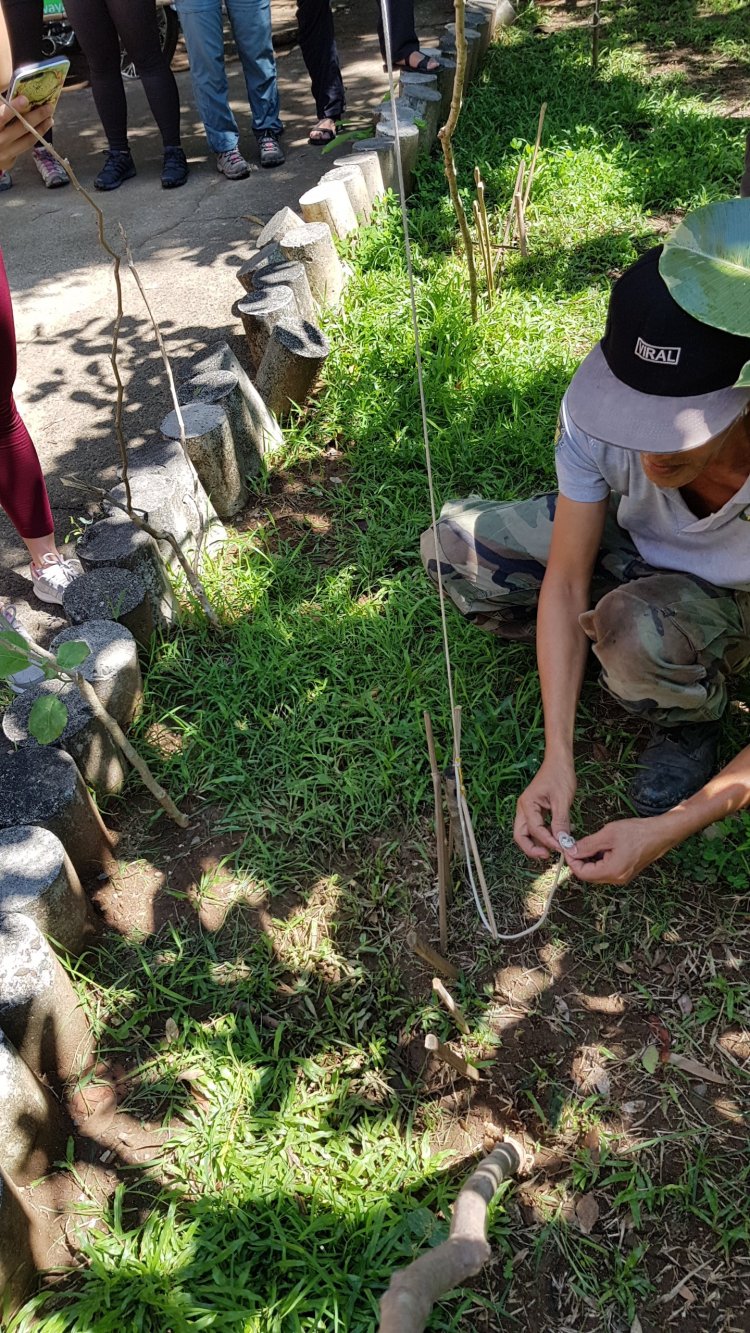 We were dropped by the track to a trail which we trekked for about thirty minutes then we arrived at the camp site. We pitched our tents and had lunch. After lunch was the practical exams. We were to make fire ourselves. We rubbed one piece of bamboo against another. Behind one piece is the kusot or the fine, dry bamboo fiber to catch the ember. 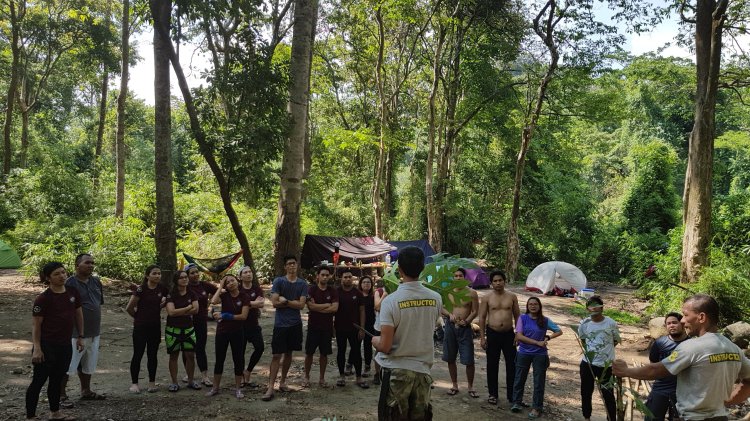 Ed conducts a lecture on the plants that may be used for food, water, and first aid.

Soon, we realized it was not that easy. Constant rubbing of a piece of bamboo against another produced smoke. But smoke is only a sign that you should rub faster to burn the kusot to start the fire. In the end, only Hero was able to make a fire from the bamboo. 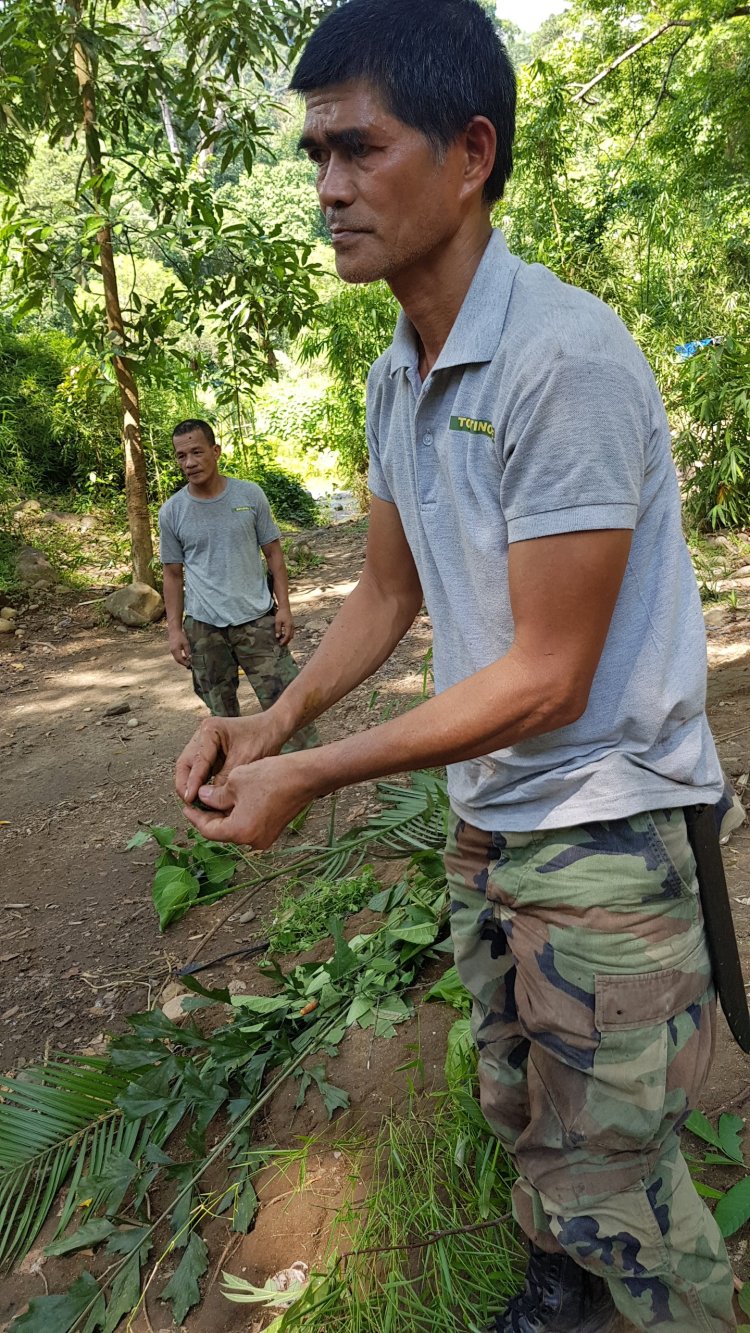 Ed demonstrates how to extract the medicine from the leaves for treatment of wounds. 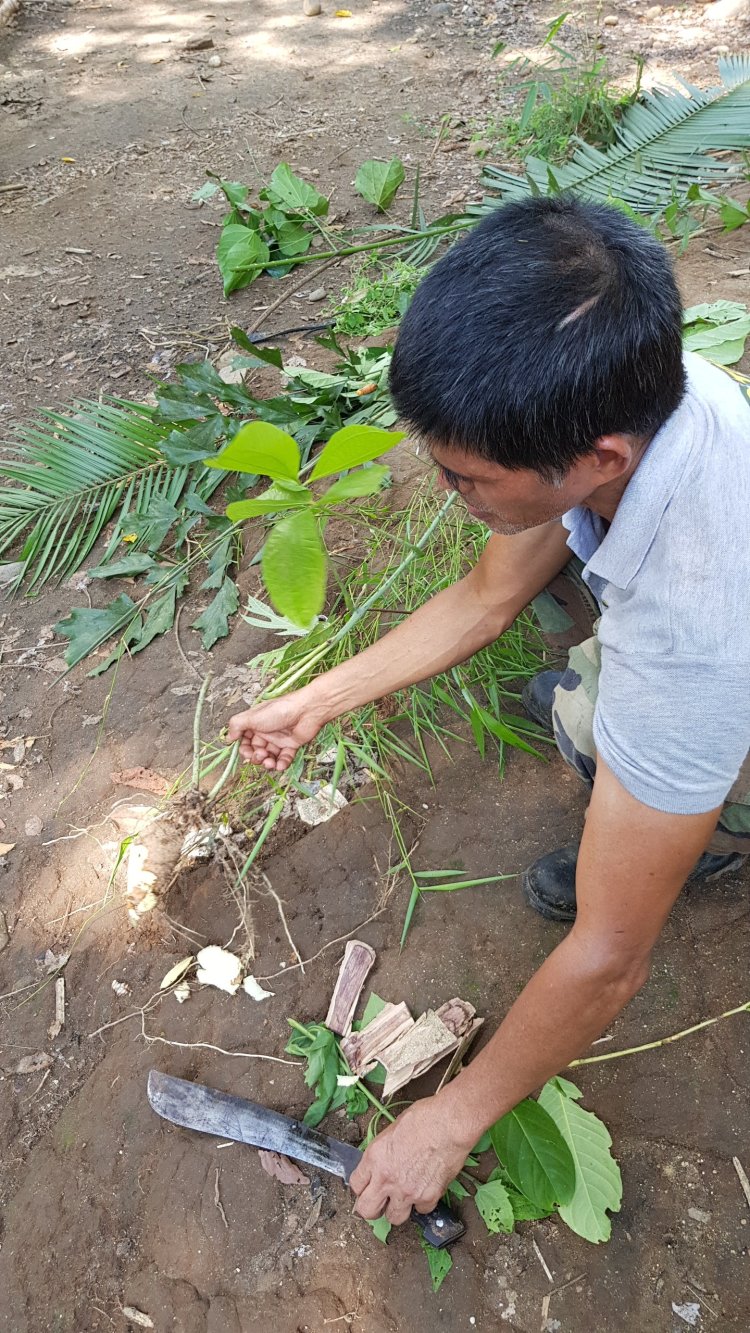 The wild potato locally called kalot. Has to be rinsed with running water for 48 hours, dried in the sun before cooking. Its poison causes hallucination once untreated. 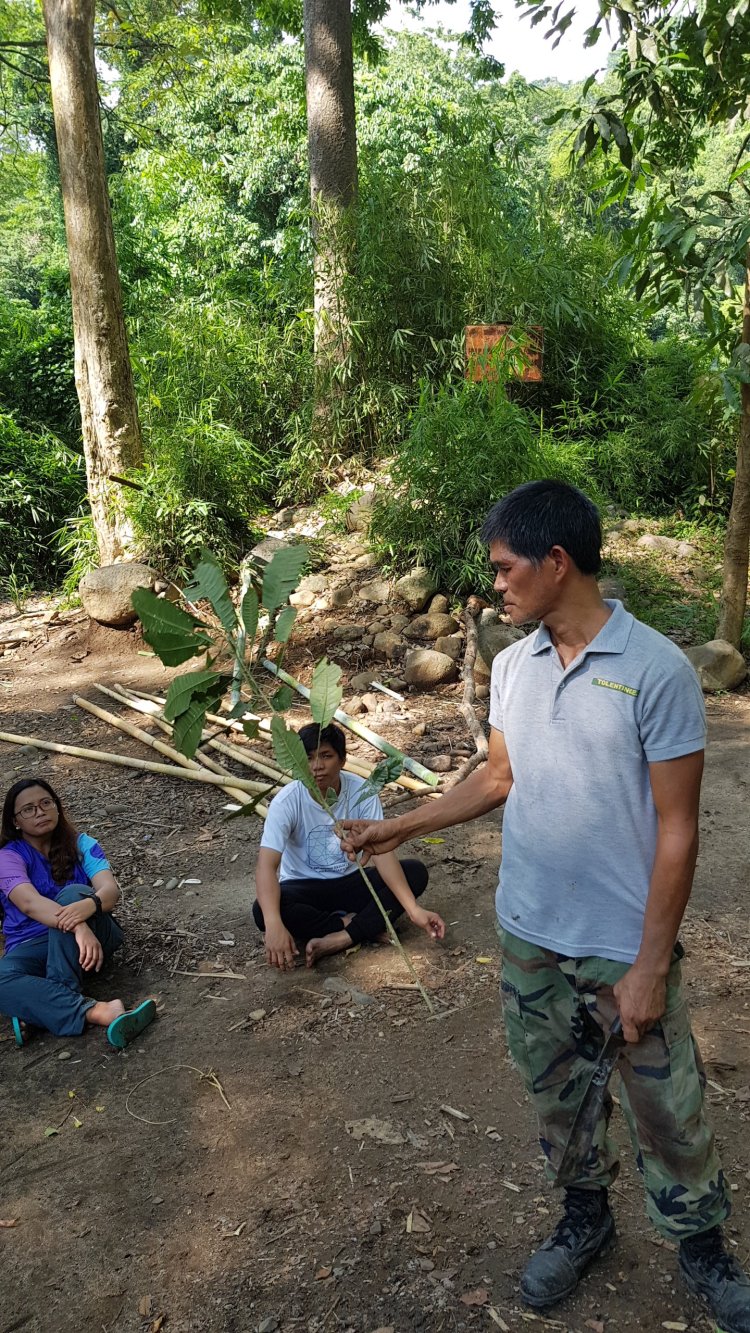 Ed holds the Dayangdang plant locals use as first aid for snake bites. 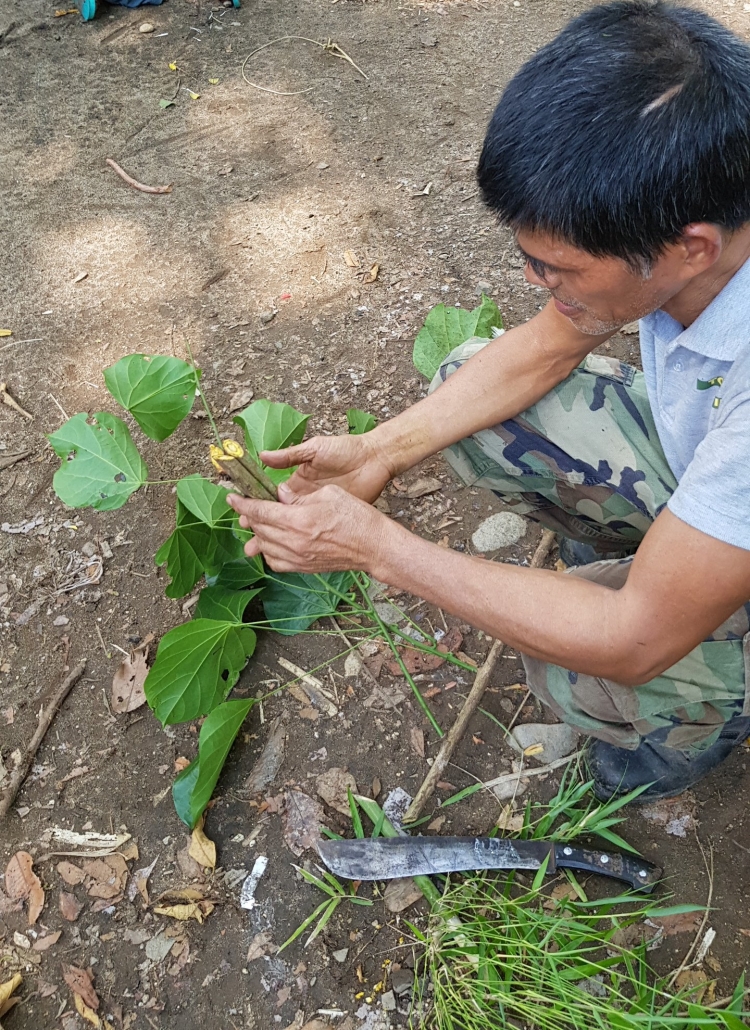 We took a dip at the river, cooked our dinner, ate and Batch 2018 and the rest of the training committee members who were present had socials which I did not attend because I was already tired and sleepy. 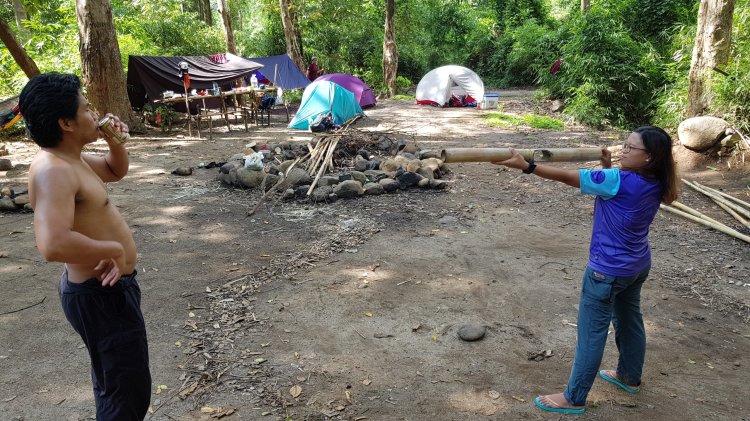 Jhed shoots Ed with the bamboo gun. Its clapping sound mimics that of guns.

The following day, we woke up at 4:30am and cooked our breakfast. By 6am we were ready for our next day lecture and after that to proceed back to jest camp. 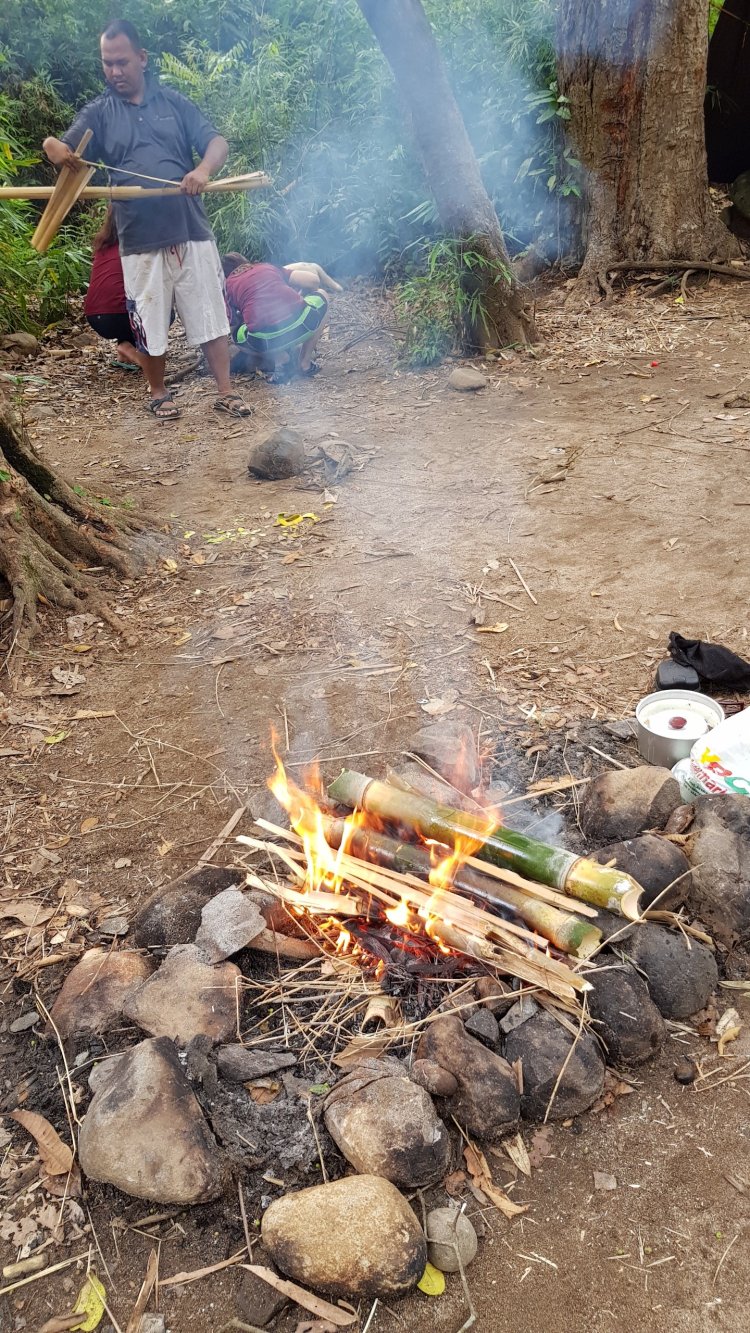 We cooked our rice in a bamboo.

That morning, Kuya Max and Ed showed us plants that we can use as first aid for wounds, plants with soft inside we can eat, plants we can gather water from. They also showed us how to process a root crop by washing it in flowing water for 48 hours to remove its poison for cooking, and a lot more. Then they demonstrated the different kind of traps that may be used to kill both human and animals. An early warning device we can set up to detect intruders, and the deadly arrow-shooting trap. 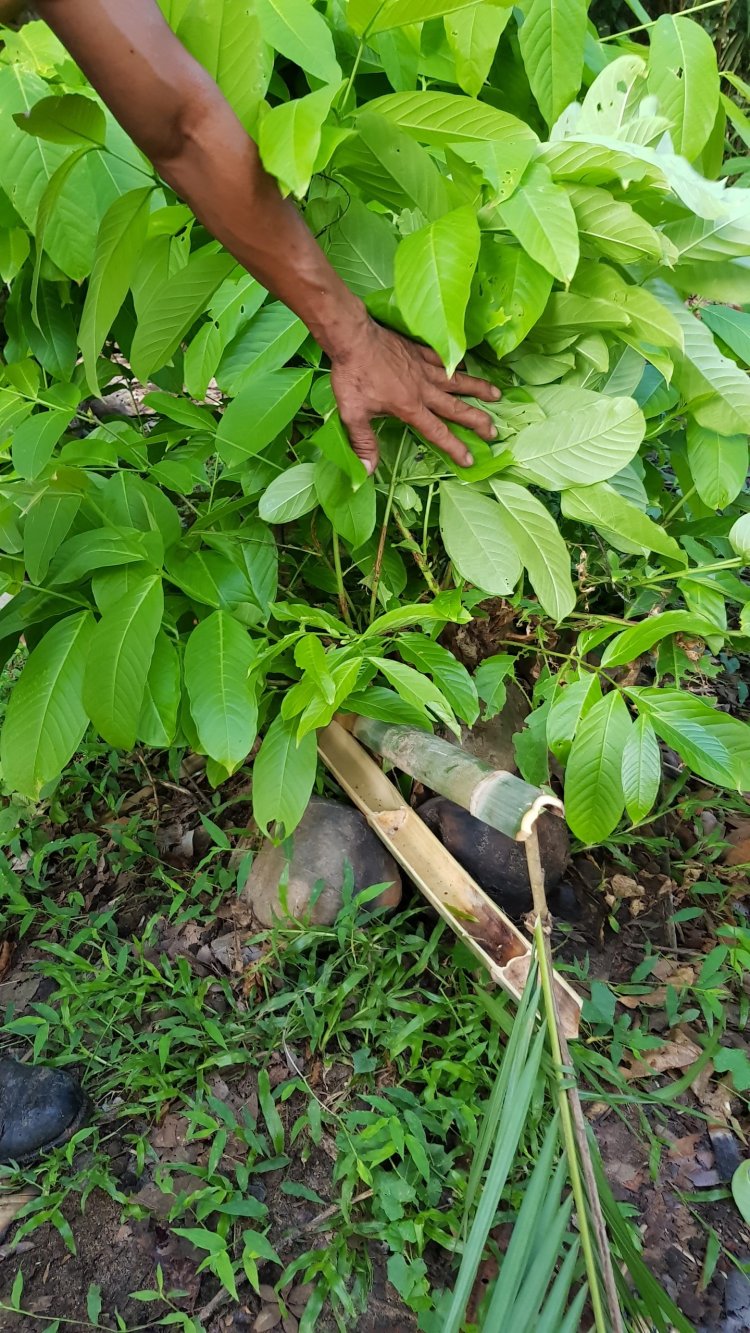 The bamboo clapper. And early warning device for intruders. 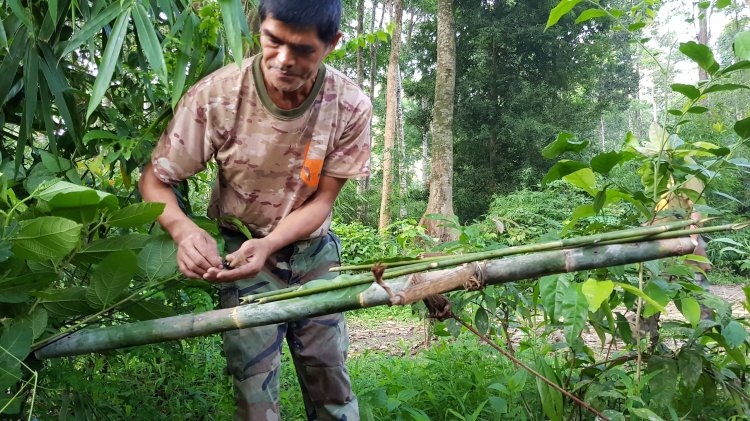 Ed prepares the arrow. It can be used with the early warning device for deadly effect. 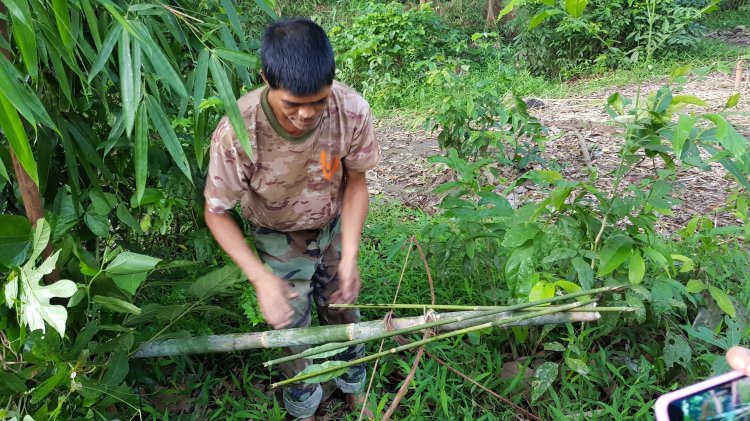 Ed sets the arrows made from three green bamboo twigs.

I was upset to learn the very efficient, economical, and very painful way of killing people. How can a human being think about ways to make a fellow human being suffer in pain and eventually die? Max said those traps were used by the Vietcongs during the Vietnam War. The Americans were helpless they hired a Filipino from Zambales to teach them the craft which improved their chances of survival in the jungles of Vietnam. 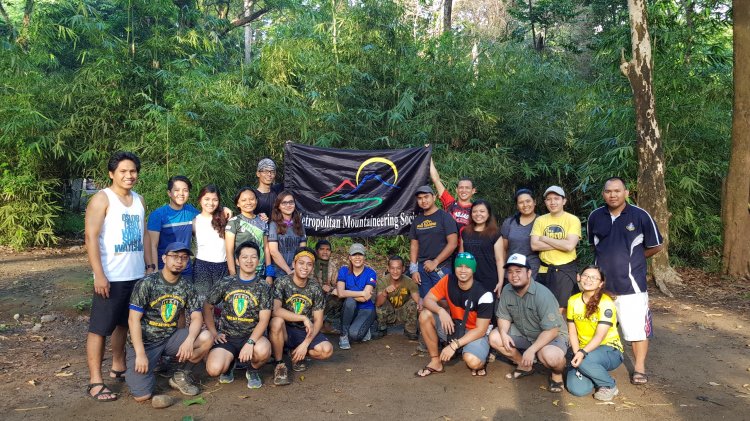 Certificates were given to each one of us by Max and Ed, our instructors, at jest camp. We dropped by another fast food chain for lunch. After a weekend full of discovery of local knowledge we headed home. 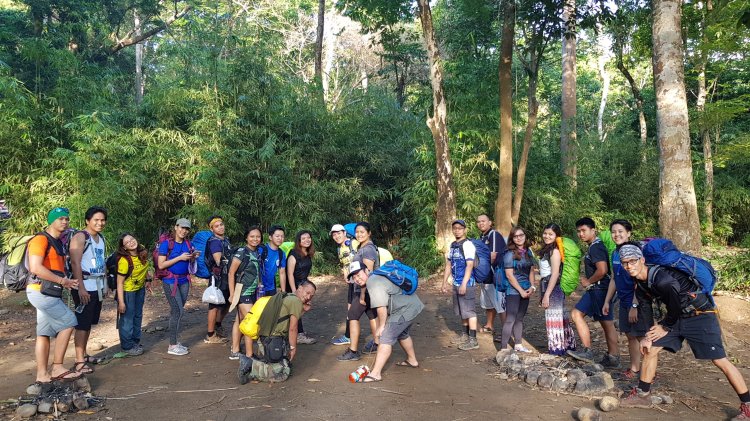