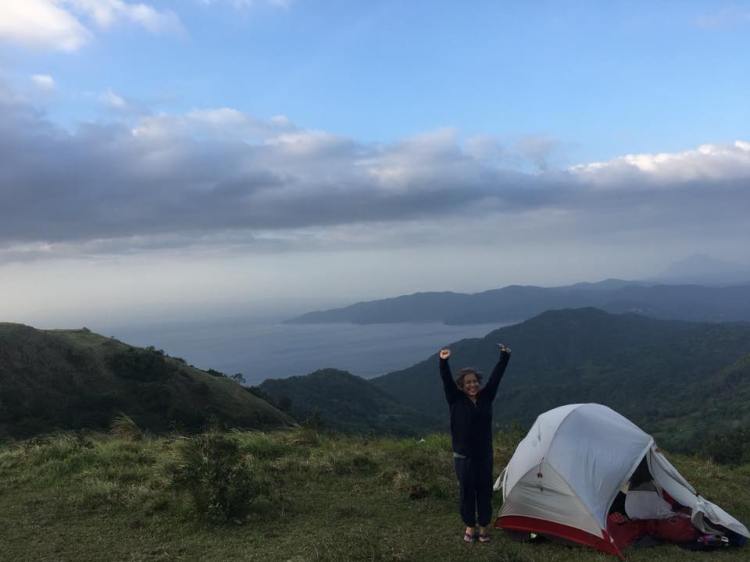 Rebecca celebrating beside our tent after reaching our campsite

The second week of the Batch 2018’s training for the Basic Life Support and First Aid was a success although we were saddened to learn that weekend that one of our MMS sisters, Jing Lenon, passed away. She was 47. After the training that Sunday, we went straight to her wake in Bulacan.

At present, we have six MMS brothers and sisters, including Jing, who have gone ahead to the other side. They are:

Jing’s batchmates led by Karen Velasco organized a Birthday (Jing was born March 15. A week before that she would have turned 48) and Memorial Climb for Jing on Gulugod Baboy on the day the trainees were scheduled for the Indoor Wall Climb in Market-Market. So, I was not present during this activity. An activity that I participated in during our training but was only able to finish a section of the three section climbs that progress in difficulty. I fear heights and my arms were too tired to make me climb the second wall, after trying other sections and also failed. After two attempts of climbing the second wall, I gave up. I was only able to climb the easiest part. But when we got the result that a member of Badjao Tribe, where I belong, in the person of Christian Loyola, the Assistant Batch Coordinator of Batch 2018, held the fastest record climb of all three walls, I was very happy.

Rebecca’s sunrise photo on a summit

Our campsite from a summit 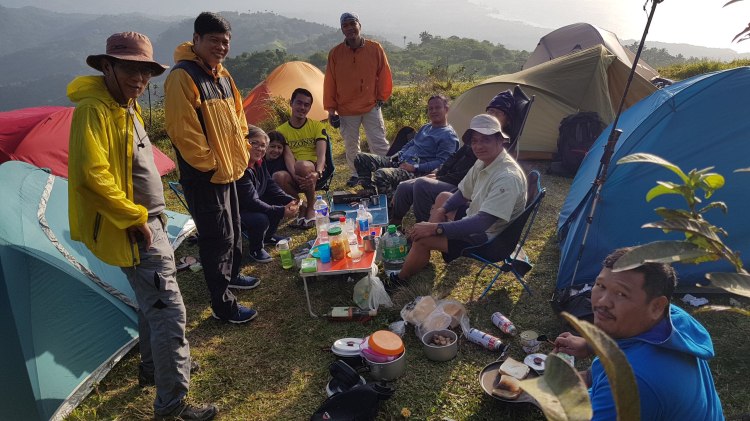 Since this was no longer a training climb, I brought my wife Rebecca and our car to the parking on the mountain, and trekked for about ten minutes to our campsite. We arrived on our campsite at around 5 in the afternoon. The wind was strong and cold. I tied one side of my tarpaulin to a guava tree, and the other side, I pegged to the ground. Rebecca and I arrived ahead of everybody who dropped by the Mabini, Batangas Market to buy our supplies. When they arrive, Emoi or Al can make use of the tarpaulin as wind cover for cooking.

It was Rebecca’s first time on a mountain and she was fascinated by the view of the ocean below and the mountains surrounding us. 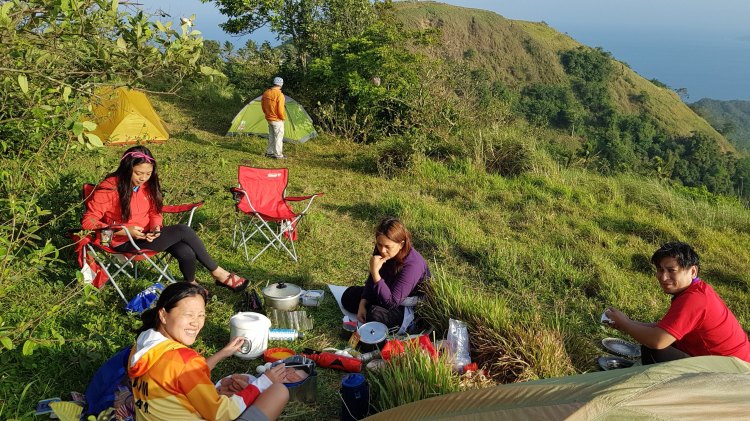 Gabriel, Kate, Ruby, and Roy preparing their breakfast. Francis is looking at something on the yellow-green tent.

Papa Ding and Melvin each brought a guitar with them. And Arin a beatbox. Before and during dinner there was of course singing.

After dinner, at around 8 pm, the memorial service for Jing began. We were seated around the small tables arranged side by side with food and drinks on them. They recalled that in that very same mountain, when Jing was a guest of MMS, she took charge of the campsite so that no other groups can camp on the area. Other guests thought she was the president of MMS. Jing had a strong personality she used to defend her friends with. Mars Angulo recalled how Jing visited him often when he was down and needed someone to talk to, no matter how far his house was from Jing. Emoi recalled that during the wake of her mother, Jing arrived and hugged him, rubbed his back and called him “honey”. When she left, Emoi’s siblings were asking him if Jing was his girlfriend. Despite Jing’s strong character and generosity, Karen disclosed that Jing would usually breakdown before her because Jing felt she had nothing else left for herself. She was a friend who knows your needs before you even say them, was the overall theme of the conversation.

After the memorial, we continued with the singing. Karen, Jing’s best friend, sang Bakit Ngayon ka Lang with Emoi as her duet. Karen has a beautiful voice. We asked her to sing few more songs which she did. 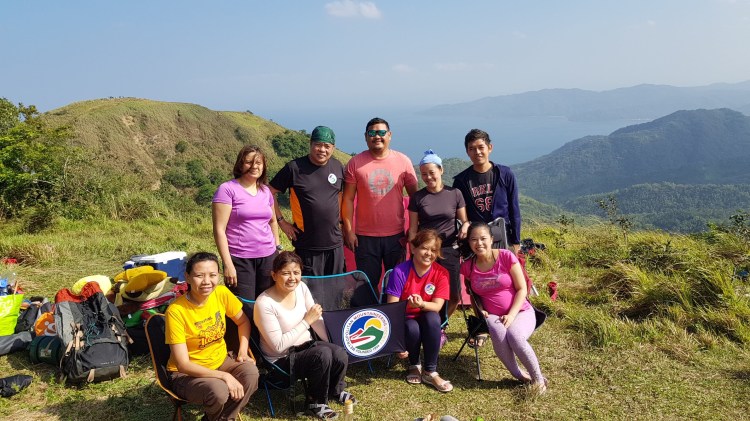 The following morning, I woke up Rebecca to see the round orange sun peeping out of the clouds over the sea. I also brought her to one of the summits for a sunrise photo. Then we went back down to help Emoi prepare our breakfast. I took off my clothes to catch all the vitamin D my body can. Then Former MMS President Cary Regaspi (Batch 2002) and Cathy arrived. Cathy Franco is also Jing’s batchmate. Emoi heated the sliced beef and prepared them his pita wrap less the diced cucumber which we consumed last night. When the surrounding was getting hotter, we packed up and left. Some went to the beach, while Rebecca and I and the Tajanlangits went ahead. Of course, we had a group photo first.