Because I don’t want to paint only a thousand words, let me begin with a five-minute twenty-nine seconds video of our climb:

The swaying and sudden stopping of the van woke me up. I looked up from behind the front seat, and through the windshield, I saw the bright Monday morning sky. After two days of rain, finally the skies were clear. 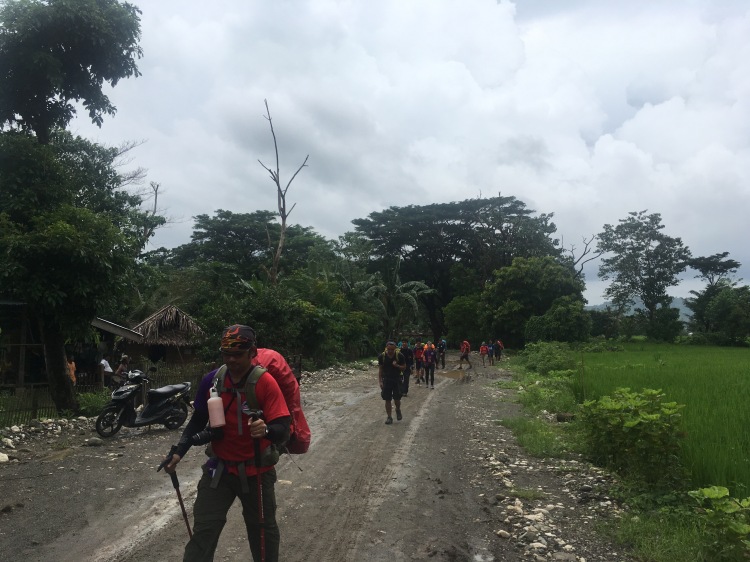 We were on our way back to Abra de Ilog port in Occidental Mindoro after climbing Mt. Iglit in Calintaan. Our goal was to board a ship back to Manila at 10 pm that night, a Sunday. Since the port was a three-hour van ride, we had to leave our jump-off point not later than 7 pm. But the rivers had swollen and some of us couldn’t cross them. The 7 pm departure from the house of Edwin Barcena in Barangay Poypoy, Calintaan, Occidental Mindoro, our jump-off point, became 2:30 am Monday. For the rest of the group, our departure to the port was only their time of arrival from Mt. Iglit.

Blame it on the rain.

The first monkey bridge I crossed going to Mt. Iglit and in real life.

If it were summer, most of the rivers would have no or at least very little water. We should be able to cross them without complexity, especially the two with the monkey bridges, that caused so much delay.

But I love the rain rather than the sun when climbing a mountain. We rest to get a shade from the sun, while we continue moving despite the rain. The sun may cause heat stoke; but while the rain may cause hypothermia, the possibility of it happening is made impossible when you walk fast. Even with the wet clothes, I still perspired. In the 6 hours we were climbing Mt. Iglit, or the 3.5 hours it took us down from Station 2, never had I felt cold even as my clothes were dripping with rain. I love the sweet taste of the rain that goes into my mouth while I walk. Sometimes, I also taste my salty perspiration. 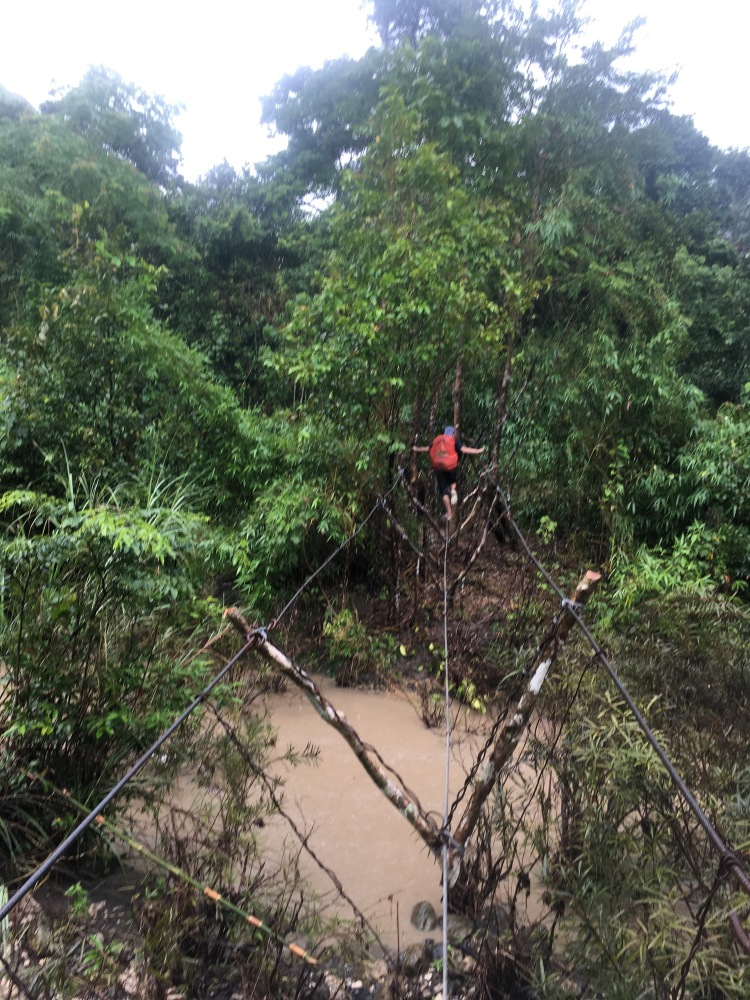 The second and shorter monkey bridge on the way up to Mt. Iglit.

I joined the Metropolitan Mountaineering Society in their open climb to the summit of Mt. Iglit. MMS conducts a yearly six month basic mountaineering training to member-applicants. The training starts in January and ends in June. After the training, the group organizes climbs open to the public. It is here where the new members apply what they learn during training.

We had fun climbing Mt. Iglit, one of the four declared Asean Heritage Park in the country. Other mountains include the Kitanglad in Bukidnon, Mt. Apo in Cotabato and Davao del Sur, and Mt. Malindang in Misamis Occidental, all in Mindanao. We only intended to climb the summit of Mt. Iglit, although we also wanted to climb Mt. Magawang to see the tamaraw grazing underneath. The tamaraw, according to our DENR Certificate of Completion, is the largest wild land mammal in the Philippines and the smallest among the buffalo family which can only be found in the province of Occidental Mindoro, specifically, on Mt. Magawang.

Jayson, Marife aka Pepot, and Doc aka Thomas smile at the camera while Jay ties his shoelace after helping everyone cross the gushing river.

We left Manila early Friday evening to catch the 10 pm ship from Batangas to Abra de Ilog in Occidental Mindoro. The 10 pm ship did not arrive, so we ended up boarding another ship at 2 am. In the process, we cancelled our itinerary to Mt. Magawang and we missed seeing the largest wild land mammal in the Philippines and the smallest among the buffalo family which can only be found in the province of Occidental Mindoro, on Mt. Magawang. 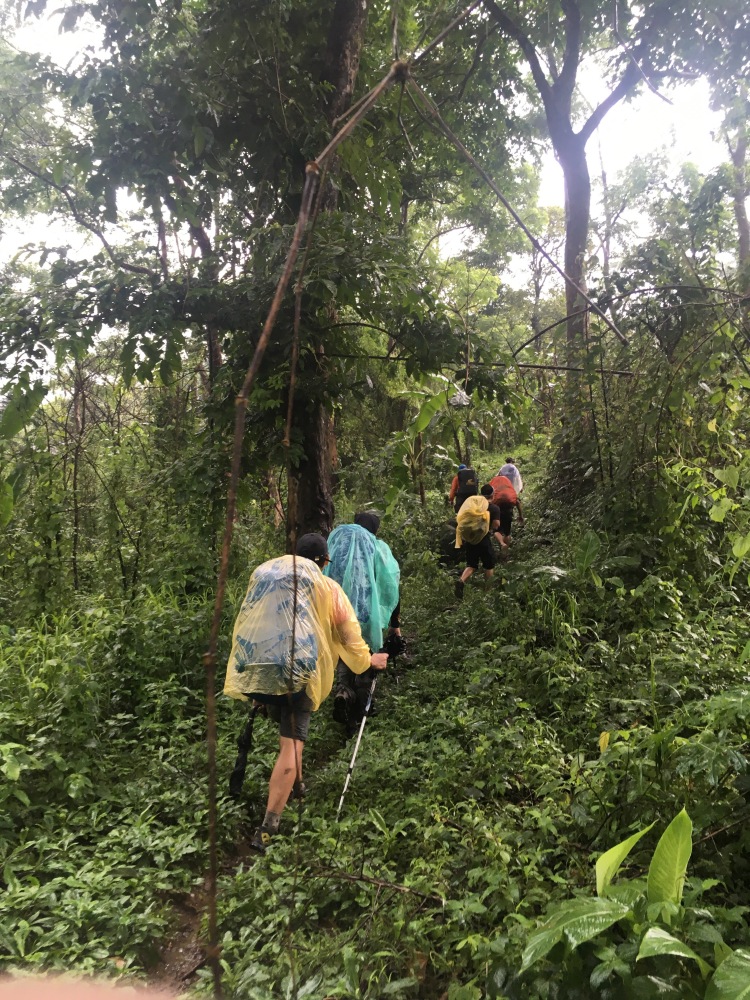 Refilling my water container at the Ranger Station 2. 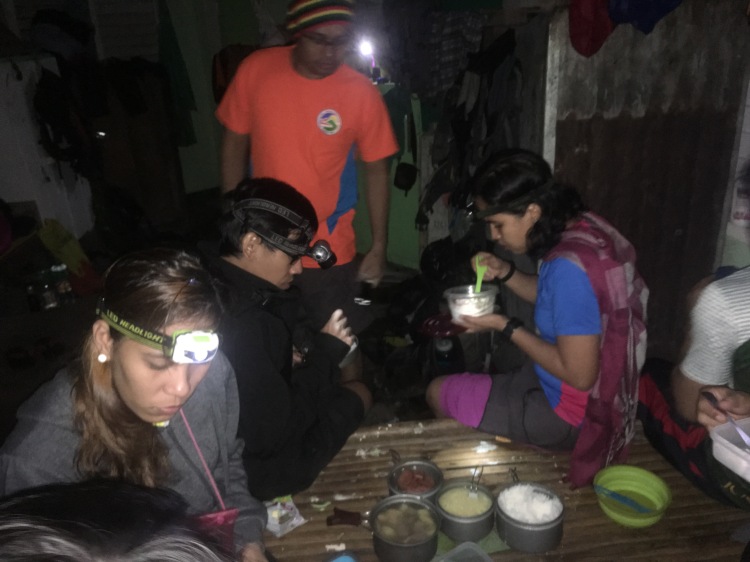 Dinner after a day’s hard trek.

We were divided into three groups: the lead, the middle, and the tail. Except on our way from the summit to Station 2, most of the time, I was behind our trail lead Jay who walked so fast he redefined what trekking speed was for me.

Selfie with Jess, Doc, and Mau behind me on our way to Mt. Iglit’s summit.

Mt. Iglit National Park’s Station 1 is composed of two concrete structures and 2 huts. It has a water source and a monkey pet. We reached it from our jump-off point after about an hour’s trek through muddy road, rivulets, and rice fields. It took us five hours to reach Station 2 from Station 1 by crossing swelling rivers and two monkey bridges.

Jay’s feet. He walks so fast he redefined what trekking speed was for me.

Station 2 is a three-hour trek to the summit of Mt. Iglit. It has one long concrete structure with rooms and beds that accommodated some of us. It also has 2 huts which they use as workshop for broom making. They cleared a hut to accommodate us, while the rest who had tents pitched them on the ground beside the hut. The lead team arrived in Station 2 four hours in advance of the rest of the team who had to be rerouted to avoid the swelling rivers.

We descended this cliff, crossed the river below, and climbed a mountain to Mt. Iglit’s summit. 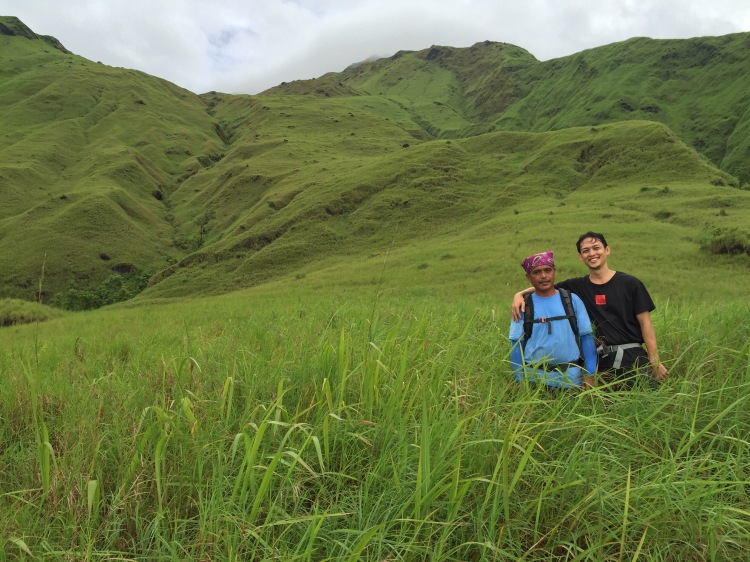 Our guide, Jeronimo Barcena, and I on the way to Mt. Iglit’s summit. Photo by Lei Anne Tabones

I have learned one very important lesson about sandals on Mt. Iglit. During the climb orientation, we were told we would cross at least three rivers. I immediately bought a pair of sandals after the orientation because I hate the sensation of wet socks and wet shoes. My plan was to wear sandals from our jump-off point to Station 2. And I’d wear my shoes from Station 2 to the summit. But I didn’t stick to my plan. I decided to keep my socks and shoes dry and instead to continue using my sandals to scale the summit. I had never encountered any problems while ascending Mt. Iglit up to its summit using my sandals. But the complications came upon my descent. On my way down, my soles slipped out of my sandals because I bought the wrong pair, the one without a toe lock or thumb stopper. I had blisters from the strap. When I could no longer endure the pain, I took my sandals off and descended the summit barefoot. But the stones were sharp and painful. I tried stepping on the grass beside the trail to cushion my soles from the stones. But when you are trailing a lead such as Jay, it doesn’t work. He and the guide do not walk. They brisk walk on the trail. First, Jay and the guide disappeared behind the clouds. And I almost cried with every step and the pain caused my knees to buckle. When Marife, Jess, Jason, Raymond, Rudy, and Jenny overtook me and they too disappeared behind the clouds, I gave up. I walked barefoot on steep descent, and wore sandals on even ground. It took me three hours to reach the summit. I was wondering how long it would take me to reach the camp site with that speed. And my stomach was already begging for food. What was supposed to be an easy descent became an epic battle between the refusal of my feet to take painful steps and my goal to reach the camp site as fast as I could to eat.

And the struggle continues.

On the summit of Mt. Iglit

There are things that the universe won’t grant even after going through all the sacrifices to get it. Like the view from on top of Mt. Iglit. All we had was a thick wall of white clouds behind us. Perhaps because we were already treated with the majestic view of its manicured green mountains while on our way up and down its summit. 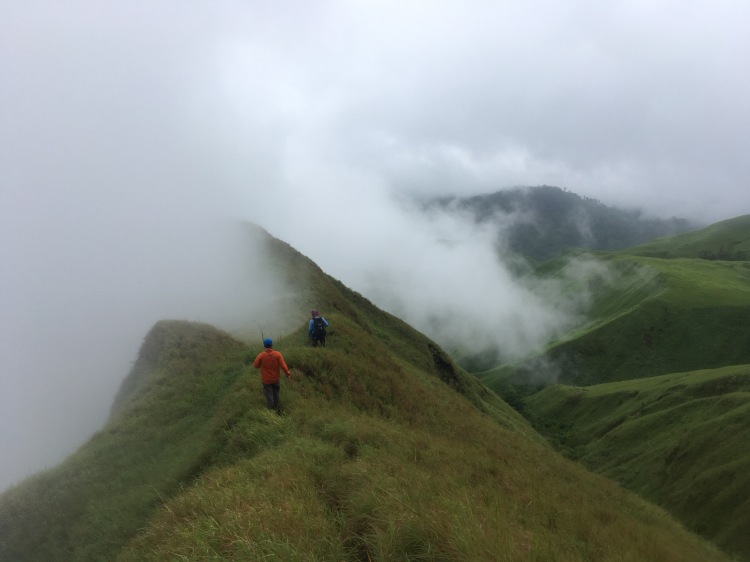 We arrived at Abra de Ilog port back to Batangas at quarter to 6 am. But the next ship was at 10 am. At past 7 am, the rest of the group arrived at the port. Most of them had little to no sleep, just like us who waited for them. But unlike them, we were dry and had eaten our dinner on a table using a plate sitting on chairs.

Jay and Jeronimo approaching the edge of the visible world 😂😂😂

We may not want to return to Mt. Iglit on a rainy day like this again, but we will return to see the tamaraws on Mt. Magawang.

The lead group goes first even to board the ship: Lei, Jay, Raymond, Jenny, Rudy, Doc, and Jess.

Check out more photos from Dell, Paolo, and Lei’s albums.