Text by Abbie Giron and so are the photos unless otherwise stated in the caption.

When I was new to mountaineering, I was guilty of saying I had  “conquered mountains.” It wasn’t after I reached the summits further more, and a call-out from a fellow mountaineer that I realized how misplaced my conceit was.

Day Zero. It was almost 8:00PM of April 6, 2018 when Aldrin Valentona, the event’s Team Lead, and I arrived at Victory Liner Cubao to wait for the bus that would bring us to Baguio City. The Metropolitan Mountaineering Society was set to hold its First Major Hike for the 2018 Trainees in Kibungan, Benguet. The team was set to finish the well established Kibungan Circuit trail, but with an extra challenge of doing it in just two days instead of the usual three-day itinerary. It was going to be a huge leap for the trainees coming from their minor hikes in Gulugod Baboy, Batangas and in Tarak, Bataan so everyone was equally excited and scared for the climb.

MMS members and Batch 2018 trainees at the jump-off. Photo by Aldrin Valentona

At exactly 9:31PM, after settling double-booking issues with the bus company, our team of 29 participants headed straight to the Victory Liner Terminal in Baguio where pre-rented jeeps would take us to a four-hour journey to the registration point in Kibungan’s Municipal Hall. By tradition we had to make a stop at Everman’s Eatery to have breakfast, buy our packed lunch, and accommodate those who wanted to take the jeepney’s top load for the rest of the ride.

Day One. At 8:30AM, after an interesting set of stretching exercises led by Paulo Valera and a short prayer by Lei Tabones, the group started trekking from Tanap Jump-Off. Since we were a big team, we were divided into four sub-groups: Lead, Mid 1, Mid 2, and Sweep. Each had a dedicated radio person to make communications smooth and easy in case the teams’ gaps became too wide.

Haji Obado leads the group across the rice terraces on concrete pathways. Photo by Aldrin Valentona.

Kibungan Circuit shares the same first part as Kibungan Cross Country, and finishing K+C last January 2016, it was a pleasing experience for me to be tracing familiar trails from Tanap to Tagpaya. The lead team – Haj, Aldrin, Lei, Jayson Jogno, Joey Calisay, Yanica Tarriela, Noy Dollete and I – were almost all second timers in the area. We took the initial parts of the trek by breeze, aimed to arrive at the designated campsite in Tagongtongaw early to have it secured and have food prepared for the mid and sweep teams when they finish the first day’s trek. 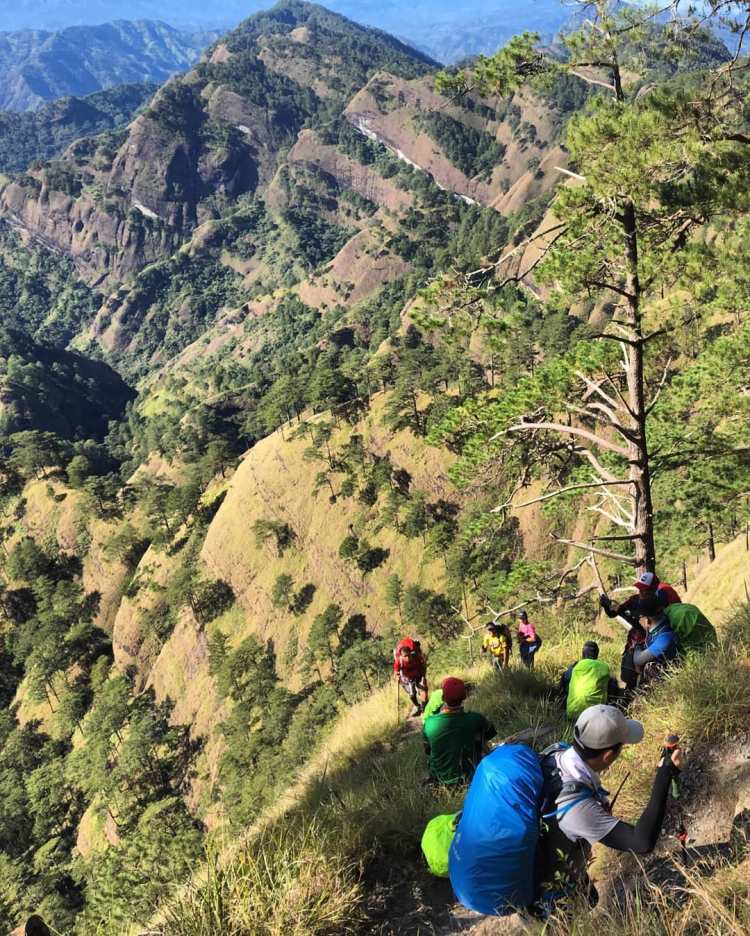 To the summit. Photo by Cindy Ferrer

Hiking is by no means simple and straightforward. Even if we were way up north, it ended up to be an extremely hot summer day. Around an hour into trekking, we lost sight of Joey and Anika, who wasn’t feeling well. They were replaced by Edmund Millanes, catching up with the lead upon our arrival at the Buga Campsite. It was just 11AM, but the team decided to stop and have our lunch while waiting for the first mid team to get to where we were. We then left the campsite to the team next to us, composed of Sir Dell, Sir Kiko, Ma’am Ruby, Tin Orlino, Karis Corpus, and Suzette Perilla. The practice was simple – for each long rest time, the first team would have to wait for the next one before leaving for the following pit stop. The iconic Mt Tagpaya was our next resting area, about one and a half hours away, if the pace was fast. The mountaineers had to trek around,  and to the top of a huge wall that made for the side of the mountain. Shortly after, our supposed campsite in Tagongtongaw would be waiting.

To the campsite. Photo by Aldrin Valentona

At 4:10PM, we came across the oldest tree in Benguet; it stood in the middle of the trail, and was quite difficult to miss. We all shook our heads in disbelief. Apart from the area being very small even for 10 tents, the grounds were lined with big roots. Such conditions would make the spot impossible for our group of 29 to have rest. A series of radio exchanges later, the lead team decided to proceed to Bulalakaw where the water source was. It should be the nearest feasible camping area. 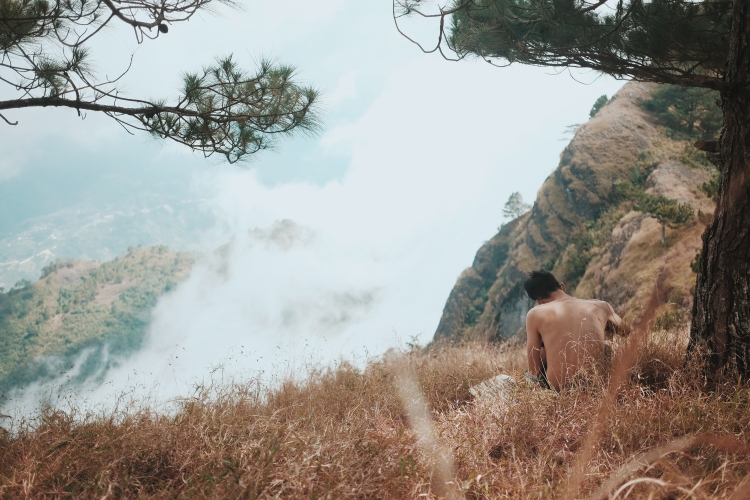 Haj above the clouds.

“We have to make an emergency camp.” That was the next thing that the other end of the radio heard from us 20 minutes later. Near the water source, we found a long stretch of trail that can potentially house a few of our tents. We knew that the sweep team was at least two and a half hours away, we had teammates in unfavorable conditions, and the next real campsite in Mt Oten was two hours further. The trail going there was supposed to be one of the most difficult parts of Kibungan Circuit, and while we knew that the lead can still scramble our way to the next mountain, we had to think about the last team members who would be looking at least five more hours of trail time. It was already nearly five in the afternoon. 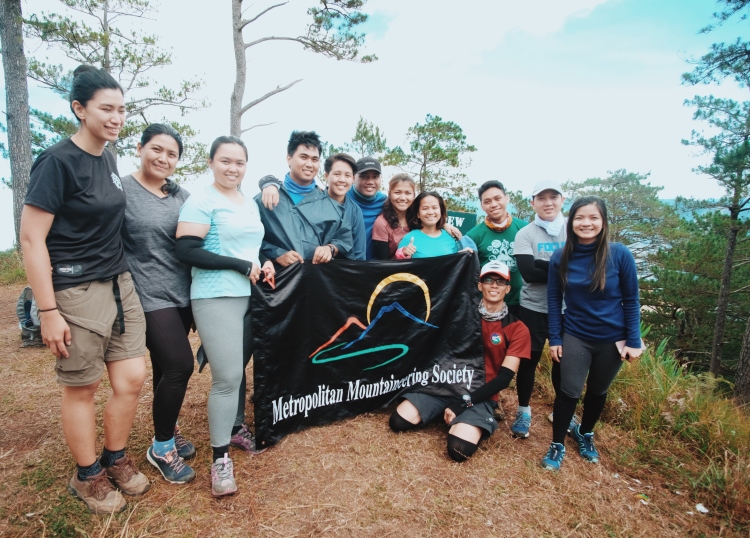 Even if we didn’t get the best campsite, it was good to know that the entire team safely arrived at Bulalakaw by 7PM. That meant that everyone would have enough time to rest for the early call time the next day. Most members still cooked good meals – we had sinigang and adobo. Some resorted to canned goods, while some, we heard, chose to just munch on bread to head straight to sleep. It was a very long day, but we were grateful still. We were halfway through the Circuit, dry and comfortable, and in small gaps between the huge trees surrounding us we can almost make some specks of the Milky Way. 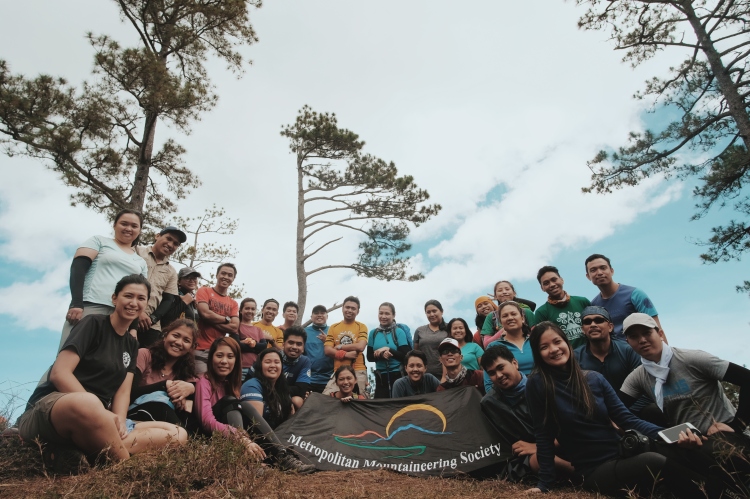 Day Two. At four in the morning, radios were already turned on to ensure that everyone was up and moving to prepare for the start of the trek. The trainees were advised that we were looking at the same length of trail time, about nine hours for the lead and definitely more for the sweep. The guides gave us a choice between passing by Mt Oten or heading straight to Mt Tagpew, the latter being the faster and easier route. Given the Trainees’ conditions and the length of trail time still waiting ahead of us, we went for the latter. The team met up at Mt Tagpew’s campsite to finally take a good group photo, something that was not feasible in the site where we spent the night, and then the lead went straight on to Legleg. From Legleg, we walked another two hours before getting to Mayos River where we took a quick dip before heading up to the pick-up point.

MMS Batch 2016 Joey Calisay pauses on a boulder to take pictures of the rice terraces. Photo by Aldrin Valentona

The second day passed like a blur. We were all just determined to wrap up the climb that’s why we chose to walk almost nonstop, running in areas where we can. The trail down to Mayos River was steep, rocky and loose, and all seasoned mountaineers know what this means. People are going to slip, knees will crack, and curses will be uttered very frequently. The first 15 members who arrived at the end point went straight to the Municipal Hall to wash up while the trainees followed past sunset.

It was an interesting sight – seeing the Trainees after their first major hike. Some were still smiling, some seemed like they’ve just given up at life, and a select few were actually almost in tears while telling their stories. When everyone was done, we had a quick post-climb session to assess the event. The comments were fairly good, and we were all in agreement of two things: First, that the climb had taught them a lot of lessons and had actually forced them to put what they had learned in the training season to the test. Most trainees, for the first time, had to stay at an emergency camp and trekked for 24 hours in two days; some experienced sweeping for a major mountain – a feat that Lala Montinola and Paulo Valera should forever be proud of. Second, that the members of MMS present during the hike were overjoyed and in awe of how the Batch 2018 Trainees all stuck together during the hike. It didn’t matter if some were stronger than others; they made it a point that everyone got down safe at the fastest possible time. It was a stunning characteristic that we never saw before, and for that, the batch should also pat themselves on the back.

The sun sets in Kibungan.

We did it. We finished Kibungan Circuit in just two days, making the Trainees joke about it as Kibungan Short Circuit. Majority said we would never do it again. Looking back though, it was something that was for the most part beautiful. Difficult hikes teach us a lot about going fast and slowing down. Moutaineers learn humility, as the hike forces us to realize we are at the mercy of things far bigger than us. Hiking pushes us to go way beyond what we thought was the limit of our strengths. So I end this piece with a line that I always carry with me all the time: We don’t conquer these mountains; we are mere passers-by. Mountains help us conquer nothing but ourselves.