An opportunity to play the role of Fr. Zerrudo, in Peter Nery’s “Gugma sa Panahon sang Bakunawa,” brought me to Dumagas, Iloilo to shoot the film and eventually back to my Pilar, Capiz.

Matt, the main character played by Eman Abatayo, visited Fr. Zerrudo who invited him for breakfast in his convent. Fr. Zerrudo and Matt had a long conversation. Fr. Zerrudo laments the immorality the Bacunawa Festival organized by Matt’s late grandma has brought to the island Pulang Pasayan, while Matt extolls the employment and the new source of income that comes with the Festival.

It was my first acting experience and hopefully not my last. I was very careful to behave in the set, to always be in my character even during breaks and to act on cue. When Eman and I were rehearsing, there were lines we could not remember. Amazingly, during the actual shoot, we were able to do our part in one take.

I did not see my performance. The cinematographer, however, assured me that I did well. Otherwise, Peter would have us retake the scene. I am going to like what I will see, he said.

I am crossing my fingers. Let’s watch “Gugma sa Panahon sang Bakunawa” together when the movie is released on 29 June to 3 July 2012.

After the shoot, I went to Iloilo and then to Pilar…

Usually, I go home only during Christmas vacations, birthdays, death or family gathering of that nature. At this time, however, I went home simply to be home: to see my aging mother, and perhaps to experience the town from the point of view a stranger at the time when the town and my family are devoid of all the revelry that comes with occasions like Christmas. 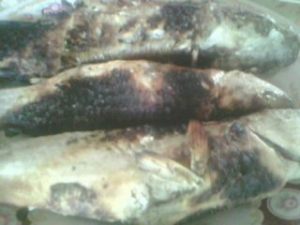 The silence of my house is broken only by the occasional passing of the vehicles, the clanging of utensils and tools in the kitchen, the calling out of birds from the trees and the cry of pigs from their sty. While this is a paradise for writers, loners and disciples of meditation, the silence is a scourge for someone who has no work. Silence has its own way of letting people realize something that he either has or doesn’t have and magnify it to the point that causes happiness or depression. This explains why busy people come back as often as they can to this place, and the unemployed leave as fast as they can.

It’s not only the silence and peace that brings me here. It’s also the food and the air. Of course, it’s the usual fresh fish and fresh vegetables, and the way Jerusha, my mother, and her crew cook them. 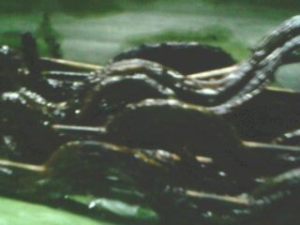 I hate processed food like spam, chorizo, hot dog, etc. Instead, I like fish and vegetables. The simpler they are cooked, the more I taste their essence. And the more I like them.

When I have enough food, I sometimes go to the garden in front of our kitchen and fill my lungs with fresh air. I also take off my clothes and allow the fresh breeze to wash my slender body. I feel clean afterwards and fresh like I have newly taken a bath.

I sometimes go to the garden in front of our kitchen and fill my lungs with fresh air.

I am also a fan of grilled puyoy (eel) sold in the market for 7 pesos a stick. If you buy three sticks at a time, you get a peso discount at 20 pesos for three sticks. A stick of puyoy can have as many as six small eels, to as little as two. The local vendor tells me he gets his supply from another town called Panay (incidentally, also the name of the island where the

provinces of Capiz where Pilar is, Iloilo, Antique, and Aklan is located). I can eat as much as ten sticks of this. Puyoy is the reason why I visit the market around 5 or 6 in the afternoon. Of course, I don’t go there alone. I ask one of Pilar’s most beautiful and intelligent ladies to accompany me. Since, this is sold just outside their refreshment store, we eat puyoy in the store. Sometimes, we also buy soft drinks or halo-halo to eat with puyoy.

A son cannot return to his mother’s womb once he is born. Instead, he leaves her side to develop his own personality as well as his identity. But distance makes the heart grow fonder. The woman that you miss becomes the man you have become.