We did not want to go all out for the 24th Anniversary. It would be difficult to surpass for the 25th, our silver anniversary. So, we settled with a simple celebration. MMS foundation day is actually March 13, 1994. This is the day the founding members hiked on Mt. Makiling. But since March 13, 2018 is a Tuesday, we held it on March 10, 2018, a Saturday, at the Scrapyard Resort in Angono. 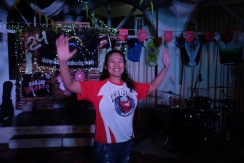 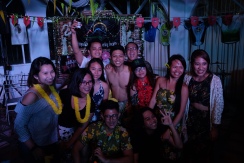 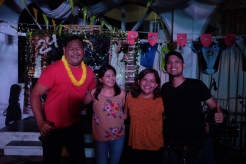 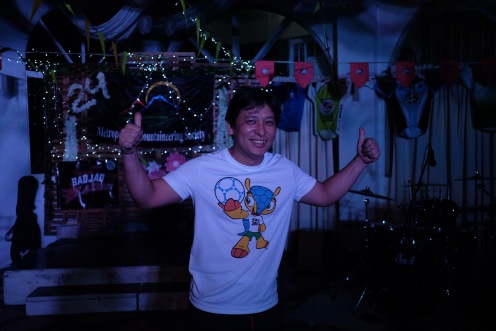 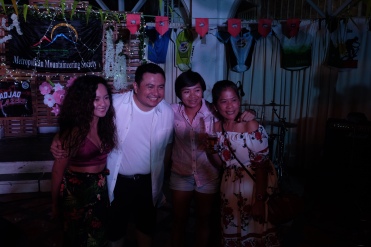 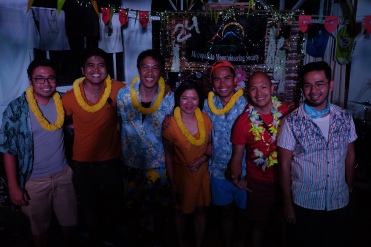 With simple celebration, I mean: bike ride was suspended for that day when it used to be a tradition for members to have a ride before going to the anniversary party venue. The bike ride was suspended because the bikers led by our MMS Founding Member Romulo “Long” Henson III was going to practice with the veteran members’ band. Their band consisted of Ricardo Prudencio aka Papa Ding (Batch 2001) on the guitar, Enrico Sanchez (Batch 2003), Mark Tristan Santos (Batch 2000), Edwin Buboy Serapio (Batch 1995) on the vocals, and Mar Alrey Jumarang aka Al (Batch 2007) on the beatbox. They sang the 90’s songs, while Long played two songs with his saxophone. Batch 2016 and 2017 also formed our own band consisting of Mark Kenneth Esguerra and Allen Ellana of batch 2017 and 2016 respectively on the vocals. Miss MMS beauty pagent is a tradition that started all the way back in 1998 when the sports fest and the beachineering were integrated as part of the MMS yearly activities. Allen wore a dress worthy of a Miss MMS beauty contest winner. Aldrin Valentuna was on the guitar, and Dolfo Roxas on the base and Abraham Maestrecampo Jr aka Abra on the beatbox. Abbie Giron also sang afterwards accompanied by Aldrin on the guitar. Then Batch 2018 blew us away with their batch presentation consisting of a short drama starred by Christian Loyola, Batch 2018 Assistant Batch Coordinator, and voiced over by Haji Obado, 2018 Batch Coordinator (BC). After the acting came their long, well rehearsed dance number, and then came Lala aka Kiela Therese Montinola playing the guitar accompanied by Christian while singing and Marvin Obero aka Vin on the beatbox.

We first heard Lala sing on Mt. Gulugod Baboy during Batch 2018 first minor climb and cooking festival. She sang a song accompanied by Aldrin on the guitar after the groups’ presentation. Because she has a beautiful voice, everyone demanded she sang more songs. Which she did.

The stage was decorated at the center with the black MMS banner I used to carry as a Batch Coordinator at every event. On the right side were the five different MMS bikers’ shirt designs owned by Long. The black banner I handed over to Haji Obado, the 2018 BC after their first minor training climb and cook fest in Gulugod Baboy.

The Master of the ceremony was Denzel Yardan (Batch 2015). There were raffle of prizes as the program went on, which culminated with the awarding of two electric fans won by my two batchmates (2017) Frances Miki Ayalin and Naneth Pecson.

Right before the roll call of the batch present since MMS founding in 1994, we surprised our batchmate Christabel Karsi Corpus with a Certificate of Recognition that reads: for overcoming all the odds to become batch 2017 harkorest climber, this certificate of recognition is awarded to Christabel Karis Corpus. It was signed by me as the 2017 Batch Coordinator, Ken Esguerra as the Assistant Batch Coordinator, Roy Lopez as MMS President, and Long Henson as the founding member.

We have talked about the award for Karis in our batch chat group but Karis never thought that we were actually going to do it. On stage, I told Karis that her award was very special since it has two certificates with two different designs: one designed by Deltek Computer Specialist and Assistant BC Mark Kenneth Esguerra, and the other by the SM Group of Company’s art director Jonalyn Jo Lastra. 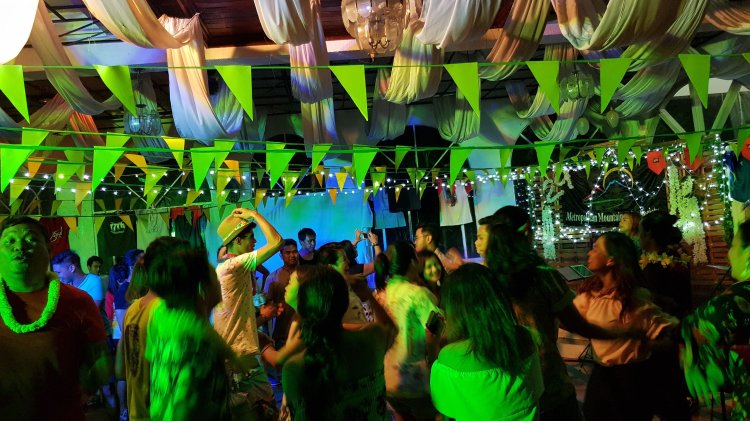 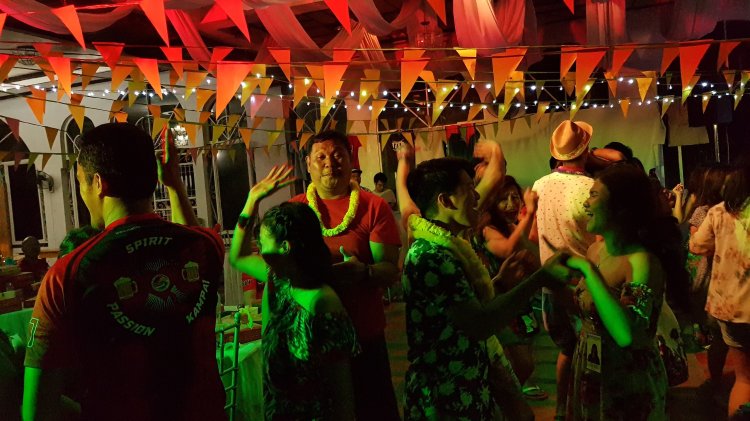 Emoi dances with the crowd

After the awarding of Certificate of Recognition to Karis, Denzel did the roll call of the members present per batch since MMS founding in 1994.

Aside from the food, alcohol, and camaraderie, MMS members look forward to the anniversary because it is during this time that the trainees are drafted by the four different tribes of MMS namely, the Badjao, Aeta, Mangyan, and Tasaday. During MMS Sports Festival and Beachineering, we are fiercely loyal to our tribe. The tribe who had the lowest score in the recently concluded Sports Fest and Beachineering has the honor of making the first pick. This year, it was the Tasaday who picked Lala as their first.

The sports fest and beachineering started in 1998, four years after MMS founding. There were no tribes at that time. There were only the veterans who wore the color black and the amateurs who wore the color gray (of course the veterans won the first sportsfest). In 1999, the black and gray were changed to four colors which now represents the four tribes: red for Badjao, blue for Aeta, green for Mangyan, and yellow for Tasaday. But it was not until 2001 that tribes were created. The trainees were assigned to a tribe by the training committee. But that changed in 2002 when the present tradition of drafting started.

I am from Badjao tribe. The Badjao’s are labeled by the other tribes as bad. They claim that if we play seriously we could be champions. But our goal, according to them, is to hurt other tribes than to be a champion, that’s why they say Badjao’s are bad. Our logo has the shadow of the devil holding a pitchfork. The Aeta Tribe boasts of being the champion for 11 years. The Mangyan are known for their tribe shirt because if the shirt is not too long, it’s too short for their bodies that exposes their navel. Tasadays are branded as the fake tribe but boasts of its beautiful members.

With Anna, Karis, and Tin

The Tasadays Katherine, Vania, and Cha between a Badjao (ako) and an Aeta (Ken)

With Aldrin, Ken, and Abbie

Since we are at the topic of Sportsfest and Beachineering which is related to drafting, here are the lists of champions from when the two activities were organized in 1998 to the present:

To trash talk other tribes, the day after the anniversary party, I posted a picture where I was under the red banner which was sandwhiched by the light-blue and yellow banners, respectively. I was in the middle of two beautiful ladies of Badjao, Frances Miki Ayalin and Anna See. 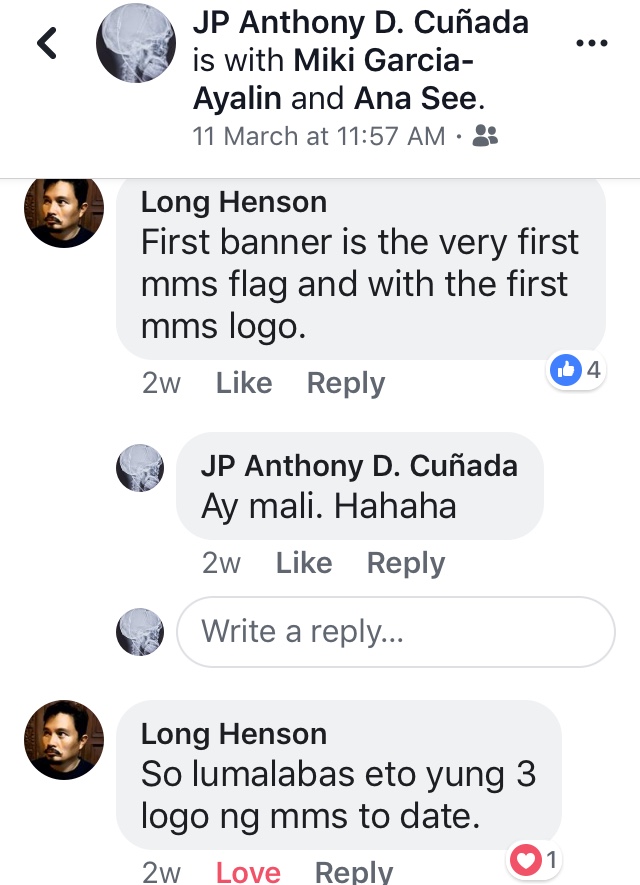 The first MMS Logo was designed by Jonjon Alegre after winning the MMS Logo design contest in 1994. In 1997 Jerick Yaya comissioned Bob Gamboa to redesign the MMS Logo which was unveiled during the christmas party. The latest logo in yellow banner was designed in March 2008 by Gwyn Fernando Habito, the creative director of Ideas & Design Exchange (Index) Corp during the term of MMS President Cary Regaspi.

17 of the 22 members of my batch (2017) were present during the 24th Anniversary. I guess we were one if not the most number of batch members present that night.